From Intramurals to the Olympics, Athletes Excel in the U.S. Air Force

The U.S. military makes an impressive effort to offers its soldiers, sailors, and airmen a well-rounded lifestyle outside of their daily activities and MOS responsibilities, and competitive sports plays an important role in this endeavor.  Just like the Army and Navy, the U.S. Air Force offers several opportunities for competitive sports to improve and maintain Read More »

U.S. Soldier-Athletes Compete with the Best, Including 2016 Olympians

As the 2016 Olympics kicks off in Rio de Janeiro, Brazil, the world’s top athletes will be competing in a wide range of sporting competitions. What you may not know is that there will be several soldier-athletes participating alongside civilians as part of the U.S. Army’s World Class Army Program (WCAP). Since 1948, 446 Army Read More »

Athlete Sailors: Sports in the Navy

It’s true you have to be in good physical condition to pass the Navy Physical Readiness Test (PRT) during boot camp and later periodic testing. However, some sailors are gifted with exceptional athletic abilities that set them apart and allow them to compete as levels above the intramural level. For these members of the Navy Read More »

7 Outstanding Professional Athletes who Served in the Military 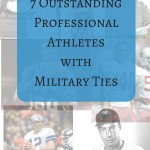 The connection between excelling in the military and in the sports arena are obvious. Hard work, dedication, and an unrelenting drive serve you well in both. Below are seven military vets who went on to break records and make an impact in the sports world after honorably serving their country. Jackie Robinson Legendary baseball player Read More »