7 Outstanding Professional Athletes who Served in the Military

The connection between excelling in the military and in the sports arena are obvious. Hard work, dedication, and an 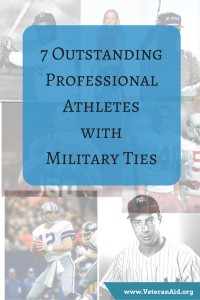 unrelenting drive serve you well in both. Below are seven military vets who went on to break records and make an impact in the sports world after honorably serving their country.

Legendary baseball player Jackie Robinson was drafted in 1942 into a segregated unit of the Army, accepted into Officer Candidate School, and commissioned as a second lieutenant. During his service, he was court marshaled for refusing to move to the back of an Army bus (he was later acquitted by an all-white panel of officers).  In 1947, Robinson became the first black person to play in the MLB and was named Rookie of the Year.

One of the best-known pro athlete veterans in the post-9/11 era is Pat Tillman who, eight months after the attack on the World Trade Center towers, left a $3.6 million contact with the Arizona Cardinals to enlist in the Army. As an Army Ranger, he served in both Iraq and Afghanistan before being killed in a friendly fire accident in 2004. He was awarded a Silver Star, Purple Heart, and a posthumous promotion.

David Robinson’s nickname, “The Admiral” is more than just a clever moniker, but a reflection of his time spent in the U.S. Navy. Despite being required to serve two years after graduating from the U.S. Naval Academy, the San Antonio Spurs still drafted him in the number one spot in 1987 and waited for him to complete his commission. They would not be disappointed.  Robinson would be named Rookie of the Year in 1990, and finished out his 14-year career with awards including two NBA championships, league MVP, 10-time All Star, Defensive Player of the Year, and three-time Olympic medalist.

Olympic silver medalist Shauna Rohbock enlisted in the Utah Army National Guard not long after graduating from BYU, where she set several school records for women’s soccer. After playing professional soccer for the San Diego Spirit, Rohbock decided to focus on her bobsleigh career, which would garner her the silver in the 2006 Winter Olympics as well as four World Championships.

Renowned golfer Lee Trevino served four years as a machine gunner in the Marine Corps , after enlisting shortly after turning 17. He spent many rounds on the golf course as partner to many of his officers, later claiming that the golf outings helped him secure a promotion to lance corporal. Trevino would finish out his golf career with 29 victories on the Champions Tour circuit, including four majors. He is one of only four players to twice win the U.S. Open, The Open Championship and the PGA Championship.

Looking back on Joe DiMaggio’s impressive history and list of achievements (including nine World Series championships and three American League MVP awards), you might notice a four-year break in his baseball participation. During this time, he enlisted in the U.S. Army Air Force, and served in California, Hawaii, and New Jersey. DiMaggio served as a physical education instructor and was promoted to sergeant. 10 years later, he would be inducted into the Baseball Hall of Fame.

It’s perhaps not surprising that Superbowl VI MVP Roger Staubach served in the military, since he won the Heisman Trophy while quarterbacking at the U.S. Naval Academy. After serving his requisite one year of service in Vietnam, he resigned his commission and went straight to the Dallas Cowboys training camp. Staubach would go on to become a six-time NFC Pro-Bowl selectee, win two Superbowl titles, and have his jersey retired at the Naval Academy. 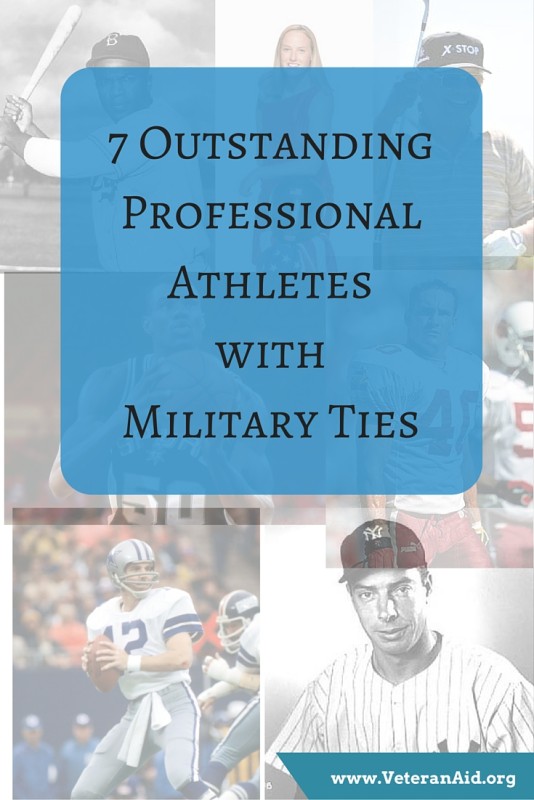 Please include attribution to VeteranAid.org with this graphic.