Posted in Uncategorized on May 20, 2016
Tags: history, holiday, military, veterans

In 1949, the Department of Defense was officially established, renaming the “National Military Establishment” that had two years prior combined the Army, Navy, and Air Force into a single department. All three branches began reporting to the new, single Secretary of Defense, withdrawing individual cabinet-level representation and unifying 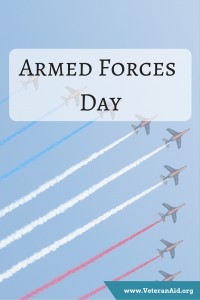 the structure of the Armed Forces.

In an effort to symbolize and solidify this new union, President Harry S. Truman led the effort to establish Armed Forces Day, a single holiday for citizens to come together and thank military members for their patriotic service. The new holiday – established on August 31, 1949 by U.S. Secretary of Defense Louis Johnson – would also replace the separate Army, Navy, Marine Corps, and Air Force Days.

On the first Armed Forces Day in 1950, more than 10,000 troops and veterans marched in a parade in Washington, D.C. while more than 36,000 marched in New York City. In Berlin, at Templehof Airfield, 1,000 U.S. troops paraded for the German citizens. The theme for that year’s celebration was “Teamed for Defense" and B-36 bombers flew over the capital of every state, showcasing the power of the U.S. armed forces and increasing awareness of the military among the public. Similarly, in the harbors across the country, famous World War II vessels like the Missouri, the New Jersey, the North Carolina, and the Iowa, were all open for public inspection.

Today Armed Forces Day is celebrated on the third Saturday of May – May 21 for 2016 – and since it is not a federal holiday, many bases and installations are open for celebrations and field trips. Many feature parades, ceremonies, and other activities in honor of the day, and festivities often start the week before, which is designated as Armed Forces Week.

The theme for Armed Forces Day 2016 is “Guardians of Freedom,” and the day is the perfect opportunity for citizens, veterans, and fellow servicemembers to not only celebrate their pride in their country, but to thank those who work so tirelessly to protect it.

Thank you to all active, reserve, and veteran members of our Armed Forces. We hope you feel the gratitude of the nation on this year’s Armed Forces Day.

One Response to “Armed Forces Day and Easy Ways to Celebrate”