The Origin of the Marine Corps

The early days of the Marine Corps

Did you know that one of the United States’ most-respected group of servicemen actually trace its founding to a tavern in Philadelphia? More than 240 years ago, as the tension of the American Revolution brewed, a young U.S. 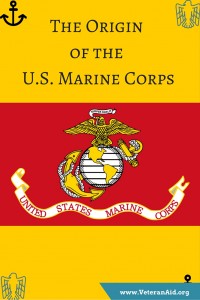 Continental Congress realized the value of a commissioning a dedicated group of soldier seamen, to be known as “Continental Marines.”

On Nov. 10, 1775, two battalions of the first U.S. Marines Corps were formed with the purpose of fighting for independence at sea and on shore. The new service was headed by Samuel Nicholas who immediately began his recruitment efforts by visiting numerous public inns and taverns throughout the city of Philadelphia, Pennsylvania. Soon he visited Tun Tavern, a well-known pub and brewery at the corner of King and Tun Avenue, and headquartered his recruitment efforts from the well-known gathering point.

Interestingly, many well-known groups had actually used the pub as a gathering spot previously, such as Benjamin Franklin who set it as a mustering point for the Pennsylvania militia preparing to fight Native American uprisings. The tavern later hosted a meeting of George Washington, Thomas Jefferson, and the Continental Congress. Prior to that, the location housed groups aimed at supporting new immigrants from England and Scotland, as well as the first Masonic gathering in the U.S.

The purpose of the newly formed Marine Corp was to establish fighting battalions of experienced seamen, primarily aimed at hand-to-hand combat between ships. This charter established the framework for today’s Marine Corps, that still holds the slogan “First to Fight,” sending Marines in to set the stage for larger engagements supported by other branches. The Continental Marines undertook their first amphibious landing weeks after their establishment, sailing with the Continental Navy to Fort Nassau in the Bahamas. 234 Marines arrived to seize gunpowder stores held at the fort by British forces, who surrendered within minutes of the Marines’ arrival.

A few months later, the Continental Marines were commissioned their first regulated uniform, a short green coat with white trim facings, and a high leather collar to protect against cutlass sword slashes (hence the nickname, “Leatherneck”). Remnants of the leatherneck can still be seen in today’s Dress Blues, which feature a high stiff color. The original green of the Marines’ uniform helped distinguish them from the blue of the U.S. Navy and Army, as well as the red of the British forces.

The Marine Corps is reformed and undergo their biggest battles

Similar to the Continental Army and Navy, the Continental Marines were disbanded not long after the ending of the Revolutionary War. A decade later, however, the U.S. Congress began reestablishing its standing armed forces, including the U.S. Navy and Marine Corps. President John Adams established the new Corps, consisting of a battalion of 500 privates, led by a major William Ward Burrows. Among the equipment Burrows inherited was a stock of leftover blue uniforms with red trim, which would become the basis for today’s modern Blue Dress uniform.

The most famous engagement for the new Marines of this period was the First Barbary War against the Barbary Pirates, who were wreaking havoc on U.S. merchant ships and had even captured the crew of the US Philadelphia. A small group of Marines and 300 Arab and European mercenaries attempted to capture Tripoli and free the crew, and though they only made it as far as Derne, the campaign has been immortalized in the Marines' Hymn.

From the naval actions of the Revolution to the mountains of Afghanistan, Marines have served valiantly in every one of the United States’ conflicts. Today’s Marine Corps maintains its battle-readiness and expertise in amphibious exercises, and its numbers have grown to more than 182,000 active duty members and 38,900 reserve Marines.

2 Responses to “The Origin of the Marine Corps”