The Best and Worst States for Veteran Senior Care

Posted in Uncategorized on May 11, 2017
Tags: state guide, tips for caregivers, tips for seniors, VA programs

At the end of 2016, there were more than 11 million U.S. Armed Forces veterans over the age of 60 living in the United States, according to the U.S. Department of Veteran Affairs. Of these, the largest population was in the age range of 65-69 years old, the so-called “baby boomers” who are just entering the “senior” phase of life where they must begin planning for their future housing and care. For most seniors, a time does eventually come where additional assistance on a regular basis is needed. Others simply want to downsize or live in closer community with their peers.

Additionally, senior veterans possess a unique set of experiences; they may retain service-related injuries, or need to live close to VA medical facilities for care. Because of multiple duty station relocations, they may not have deep-rooted ties to any one state, and feel free to consider living anywhere in the U.S. In fact, many value living around others who understand the life of a soldier, and how it can impact an entire family for generations. 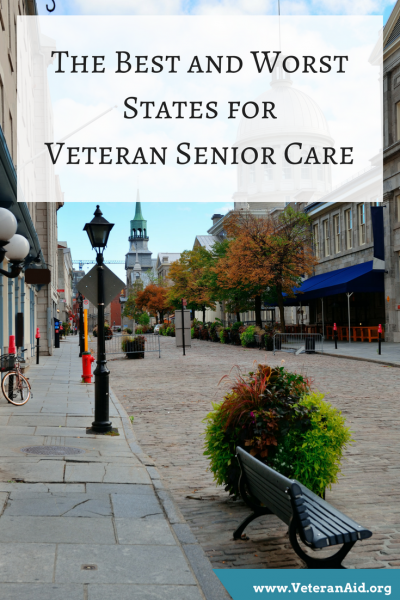 Considering these factors, analysts at APlaceforMom.com recently undertook a large-scale survey of all 50 states, statistically evaluating which states are the best – and worst – options for veteran senior care, based on the type of senior living options. A Place for Mom is one of the nation’s leading free senior housing advising services, and employs experts who are familiar with local housing markets and trained in insurance and VA policies. The company also maintains the largest online senior living referral listing, which includes verified reviews and ratings.

While other similar surveys have made general estimations on which states are best and worst for veterans, based on things like number of VA facilities and quality of life, this more recent study cross-referenced statistics from numerous sources* to calculate its final results. For example, researchers considered several important factors such as:

It’s perhaps not surprising that many of the states known for higher costs of living and rental fees seem to rank lower on the list for veterans looking to make the most of a limited budget. Additionally, states with more veterans as a percentage of the overall population were given higher preference, with the assumption that these states would feature more services and facilities for veterans and their families.

Below are the best and worst states for veteran senior care, based on the type of housing and care offered.

The worst states for assisted living suffer from higher costs of care and housing, as well as smaller veteran populations compared to state’s overall population.

The worst states for independent living communities suffer from higher costs of housing options, as well as a smaller veteran populations compared to state’s overall population.

Memory Care communities specialize in treatment and managing of symptoms related to dementia and Alzheimer’s disease. Residents typically live in semi-private or private rooms and participate in appropriate therapies and activities. There are often additional security measures in place for the residents’ safety.

The worst states for memory care communities typically have higher costs of housing and services, and a smaller veteran population compared to the state’s overall population.

The best states for veterans looking for senior apartment living include lower fees and rental rates, as well as a larger veteran population.

The worst states for veterans looking for senior apartment living had higher fees and rental rates, as well as a smaller veteran population compared to the state’s overall population.