The Best and Worst States for Retired U.S. Veterans

The average age for a retiring U.S. military officer is just 47 years old – 43 for non-disability enlisted personnel – meaning that a retired veteran has many years of life ahead of him or her after retiring. Many choose to start new careers, continue their education, or even start their own business. In any case, the ability to easily access the benefits their service has earned them, especially in health care, is an important factor in their life after Expiration of 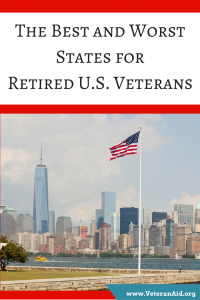 We recently started a series showcasing veteran benefits in some of the nation’s largest cities, like Chicago and Houston. But how do all 50 states and the District of Columbia rank overall in terms of best and worst locations for military veterans? Veterans often have the opportunity to move anywhere they choose when they end their service; many have seen several posts and bases across the nation. How can they find the best home for their time transitioning back into civilian life?

In 2016, the website WalletHub conducted an extensive research study into analyzing just that, using a set of 20 key questions in three main areas, giving each state a score from 0 to 100, and then weighting the scores to reduce the impact of population and other differences that could skew results. Topics analyzed included:

After giving each state an overall score, with 100 being the best and 0 being the worst, a ranked list was published. The top 10 best states for military retirees, based on their combined scores for economic environment, quality of life, and heath care, were:

The worst 10 states for military retirees, based on their combined scores for economic environment, quality of life, and heath care, were:

The study also pulled out some interesting sub-rankings and statistics, such as:

Once you’ve narrowed down the state you feel would be best for you and your family, or simply seen how your current state ranks, you can begin exploring veteran resources in your area. There are often many benefits that you may not even be aware of, just waiting for you to take advantage of. For example, for senior veterans and surviving spouses needing assistance on a daily basis with activities of daily living, there’s actually an “Aid and Attendance” Benefit that the U.S. government will provide to help defer costs. For more resources, rankings, and helpful free information for veterans and veteran families, visit veteranaid.org.

9 Responses to “The Best and Worst States for Retired U.S. Veterans”