How the Veterans Administration Was Created: History of U.S. Veteran Benefits

The most recent surveys of the U.S. population show that there are more than 21.8 million U.S. veterans today living today. They represent an important and vital population, and the U.S. government, from its origins, has rightly recognized the need to support them during and after their service to the nation.

Care and assistance for brave American soldiers can be traced all the way back to the first English colonies in North America, where the Plymouth colony was the first to provide money to colonists who were disabled during the colony’s defense against Native Americans. When the Continental Congress met in 1776 during the Revolutionary War, it sought to encourage enlistment and curtail desertions with the nation’s first pension law, granting half-pay for life in the case of loss of limb or serious disability during military service.

Interestingly, this Congress did not yet have the authority or the money to make these payments, so the responsibility fell to the individual states, who then fulfilled it in varying degrees. Only around 3,000 Revolutionary War veterans would ever draw a pension.

After the war and the ratification of the Constitution, the national government assumed the responsibility of paying veteran 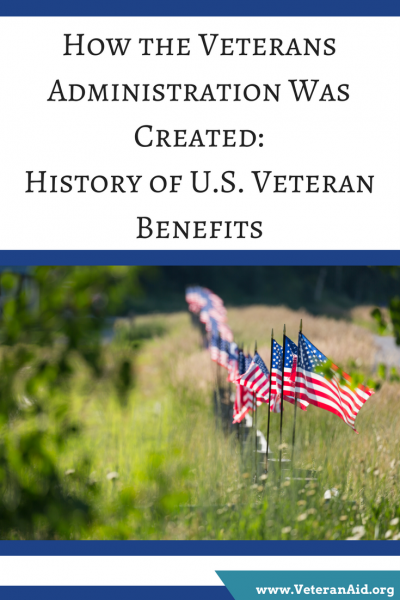 benefits. In 1818, with an increasing cost of living and a surplus in the Treasury, the U.S. Congress passed a new law raising allowances for all disabled veterans and extended benefits to widows and orphans of the soldiers of the War or 1812 for five years, a term which would later be lengthened. This new legislation saw a direct and immediate increase in the number of pensioners, jumping from just 2,200 to 17,730, and increasing the cost of pensions from $120,000 to $1.4 million.

After the Civil War, the number of enrolled U.S. veterans had spiked from around 80,000 to more than 1.9 million, although this official number only included Union soldiers (Confederate soldiers would receive no federal veteran benefits until 1958, when Congress pardoned Confederate servicemembers and extended benefits to the last remaining survivor).

1862 was an important year for veteran benefits, as new legislation began to provide disability payments based on rank and degree of disability, and also liberalized benefits for widows, children and dependent relatives. The law also covered military service in time of peace as well as during the Civil War, and included, for the first time, compensation for diseases such as tuberculosis contracted during service. Union veterans also were assigned a special priority in the Homestead Act of 1862, providing land our West at $1.25 an acre.

Also in 1862, the National Cemetery System was established, providing burial for Union dead. In an effort between 1865 and 1870 to rebury battlefield casualties, 70 national cemeteries were opened and 300,000 bodies were gathered and reburied; of these, 142,000 were unknown. In 1873 Congress authorized national cemetery burial for all honorably discharged Union veterans.

In his second inaugural address in 1865, President Abraham Lincoln called upon Congress “to care for him who shall have borne the battle and for his widow, and his orphan.” This phrase was later adopted as the VA’s motto.

The first national effort to provide medical care for disabled veterans had begun in 1812, with the establishment of the Naval Home in Philadelphia. This was followed by two facilities in Washington, D.C.: the Soldiers’ Home in 1853 and St. Elizabeth’s Hospital in 1855.  After the Civil War, the number of disabled veterans was so great that Congress authorized the National Asylum for Disabled Volunteer Soldiers (later renamed the National Home for Disabled Volunteer Soldiers). This federal organization maintained homes across the nation, providing room, board, and some medical care to disabled and/or indigent veterans. By the 1920s, the level of medical care had risen to hospital standards. In the following years, these national homes would care for veterans of Mexican, Civil, Indian and Spanish-American Wars, and for noncombat veterans as well.

The Consolidation Act in 1873 revised pension legislation, distributing benefits based on the degree of disability rather than the service rank. This legislation also introduced the Aid and Attendance

Benefit, helping veterans hire a nurse or housekeeper. This benefit is still available today for veterans who need daily assistance completing tasks of daily living, whether in their homes or in a care facility.

With its entrance into WWI, the U.S. would see its number of servicemembers grow to 4.7 million, with more than 204,000 of those returning home injured and 116,000 killed in action. Around this same time, the U.S. government was revamping its veteran benefits, beginning to offer government-subsidized insurance against personal injury, loss of life, or capture, along with a discharge allowance. Additionally, courses were established for rehabilitation and vocational training for honorably discharged veterans with dismemberment, sight and hearing loss, and other permanent disabilities. Numerous care facilities were opened, but still struggled to keep up with the growing demand for care and support, and the government turned to working with private hospitals under contract.

Congress in 1921 created the Veterans’ Bureau to consolidate veterans programs managed by three agencies — the Bureau of War Risk Insurance, Public Health Service, and the Federal Board of Vocational Education. The Veterans’ Bureau headquarters was established at the Arlington Building at 810 Vermont Avenue NW in Washington, D.C. an 11-story structure was built in 1918 and previously serving as the  headquarters for the Bureau of War Risk Insurance.