Comparing Basic Training for the 5 Branches of U.S. Military Service

Members of each branch of service typically consider their own basic training to be the most challenging and toughest of all the branches; it’s a debate of hard-knock stories and amazing feats of endurance and learning. The reality is that all recruit training for U.S. military service is strenuous, mentally and physically, and all who find the 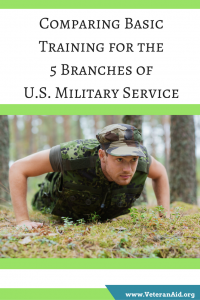 intestinal fortitude to complete them should be respected and commended.

A common question may be "How long is military boot camp?" On average training can last anywhere from 8-12 weeks. While each service has different training schedules and requirements, orientation week is basically the same across all five branches. During this time, new recruits:

Though Week Zero may be considered “intake,” actual training does begin at orientation, with many services beginning physical training (PT) within the first few days. This varies from branch to branch, but overall training typically lasts between eight and 12 weeks, culminating in graduation.

Overview: After the Zero Week reception, the week of “fall in” commences, covering the basics of rules, regulations, and processes. Week 2 introduces recruits to their Drill Sergeant (DS), who begins the process of building up mental and physical endurance over the next two weeks. Week 4 begins the focus on marksmanship and the M16A2, teaching recruits proper care and firing from many different positions. Week 5 features recruit trials of the Basic Rifle Marksmanship Qualification Course and the Fit to Win Obstacle Course. Weeks 6-8 focus on building camaraderie, confidence, and combat skills, culminating in Week 9’s Victory Forge, a challenging three-day retreat that tests all the recruits have learned to that point. Week 10 culminated with graduation.

Overview: Navy boot camp is typically 8 weeks long, and progresses from basic conditioning, to a “confidence course” and teambuilding week, then on to hands-on training. On week 3, recruits board a land-bound training ship and learn everything from ship nomenclature, to ship-bound first aid techniques, to semaphore (signaling with flags). Around week 4, they encounter their first physical training test, as well as live fire training and an academic test. Week 5 focuses on career path, and week 6 cover on-board fire safety. Week 7 puts recruits through their toughest test in Battle Stations, 12 different scenarios that, when completed, officially change a recruit into a full-fledge Sailor, donning the official U.S. Navy ball cap.

Overview: Every enlisted Airman begins their Air Force career with 7.5 weeks of Basic Military Training (BMT) followed by Airmen’s Week. Week 0 is considered intake and introduction to the Military Training Instructor (MTI). Week 1 begins mental and physical conditioning, and Week 2-3 covers Air Force history and its role in countering diverse threats to national security. Week 4 begins to prepare airmen for combat with defensive fighting techniques and lifesaving skills, leading up to Week 5 which is considered the most challenging week of BMT, focusing on field training exercises and combat scenarios. Week 6 covers final evaluations of fitness and airmanship skills. Once you’ve survived all this, you celebrate with the Airman’s Run and graduation in Week 7, followed by the final step before leaving for tech training, Airmen’s Week.

The Coast Guard refers to the process of becoming a Coast Guardsman as “forming,” and it entails 8 weeks at Camp May. After three days of intake and admin, Recruit Training begins in earnest, when recruits are assigned to a company and introduced to their Company Commander (CC). The first week or two is often considered to be the most difficult, as recruits engage in intense physical fitness training and an introduction to required knowledge. At the end of the fourth week, recruits take the mid-term exam that marks a turn in training towards more hands-on skills like marksmanship, line handling, seamanship, and firefighting. Recruits then complete their Assignment Data Card that designates recruit preferences on potential service location. At the end of week 5, recruits receive their orders, then training shifts to focus on final first aid and CPR training, as well as arranging for travel and graduation.

20 Responses to “Comparing Basic Training for the 5 Branches of U.S. Military Service”