Five-Star Generals in the U.S. Military

Over the history of the United States, a small handful of men have achieved the very highest rank of military service, all during extreme times of war. In December 1944, during the midst of WWII, the U.S. created a special five-star officer rank to establish both a clear internal order of seniority and a near-equivalence between the Army and Navy 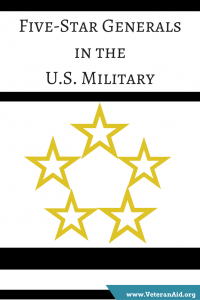 services. The new ranking also helped give proper hierarchy to U.S. officers commanding higher-ranking officers of Allied forces. These five-star U.S. officers retained their ranking and never retired – they drew active duty pay until their deaths – and the official ranking was retired in 1980 with the death of the last surviving five-star general.

Nine Americans have been promoted to the five-star rank, with one of them – Henry H. Arnold – receiving it in two services. The five-star ranking was officially retired in 1981 upon the death of General of the Army Omar Bradley, who was the last recipient to receive five stars and who was promoted during the Korean War.

Fleet Admiral of the United States Navy is a five-star flag officer rank that ranks immediately above admiral and is equivalent to General of the Army and General of the Air Force. There are currently no fleet admirals on active duty and no living officer of this rank; the last was Chester W. Nimitz who died in 1966.

William D. Leahy: Leahy was a Naval officer who served as the senior-most United States military officer on active duty during World War II. He held multiple titles and was at the center of all the major military decisions the United States made in World War II. After retiring from the Navy in 1939, he was recalled to active duty as the personal Chief of Staff to President Franklin D. Roosevelt in 1942 and served in that position throughout World War II.

Ernest J. King: The Navy’s second most senior officer after Leahy, King served as Commander in Chief, United States Fleet and Chief of Naval Operations during World War II. He directed the Navy’s operations, planning, and administration, and was a member of the Joint Chiefs of Staff. He was the second admiral to be promoted to five star rank.

Chester W. Nimitz: The leading U.S. Navy authority on submarines, Nimitz played a major role in the naval history of World War II as Commander in Chief, United States Pacific Fleet, and Commander in Chief, Pacific Ocean Areas for U.S. and Allied air, land, and sea forces. He was later key in acquiring approval to build the world's first nuclear-powered submarine, and was the last surviving Fleet Admiral.

William F. Halsey, Jr.: Halsey commanded the task force centered on the carrier Enterprise that conducted a series of raids against Japanese-held targets, and was later made commander of the South Pacific Area. He led the Allied forces during the Battle for Guadalcanal and through the fighting up the Solomon chain and then became commander of the Third Fleet.

General of the Army

George Marshall: Marshall served as Chief of Staff of the United States Army under presidents Franklin D. Roosevelt and Harry S. Truman, and Secretary of State and Secretary of Defense under Truman. Thanks to his leadership during World War II, he was hailed as the "organizer of victory" by Winston Churchill.

Douglas MacArthur: Chief of Staff of the United States Army during the 1930s, he played a prominent role in the Pacific theater during World War II and received the Medal of Honor for his service in the Philippines Campaign (his father also received the medal, making them the first father and son to do so). He also was the only man ever to become a field marshal in the Philippine Army.

Dwight D. Eisenhower: Before serving as 34th president of the U.S., he served as Supreme Commander of the Allied Forces in Europe during WWII. He was responsible for planning and supervising the invasion of North Africa in 1942 and the successful invasion of France and Germany in 1944–45 from the Western Front.  In 1951, he became the first Supreme Commander of NATO.

Henry H. Arnold: Instructed in flying by the Wright Brothers, Arnold was one of the first military pilots worldwide. He served as Commanding General of the U.S. Army Air Forces during World War II, and is the only officer to ever hold a five-star rank in two different U.S. military services (he received his five stars in the newly formed Air Force once it split from the Army). He oversaw the expansion of the Army Air Forces from around 20,000 men and 800 combat aircraft into the largest and most powerful air force in the world.

Omar Bradley: The only five-star general to receive his ranking after WWII, Bradley began his distinguished service in North Africa and Western Europe during World War II. From the Normandy landings in 1944, Bradley commanded all U.S. ground forces invading Germany from the west, commanding 43 divisions and 1.3 million men, the largest body of American soldiers ever to serve under a single U.S. field commander. In 1949, Bradley was appointed the first Chairman of the Joint Chiefs of Staff, and was promoted to five stars in 1950, the same year he oversaw the policy-making for the Korean War.

General of the Air Force 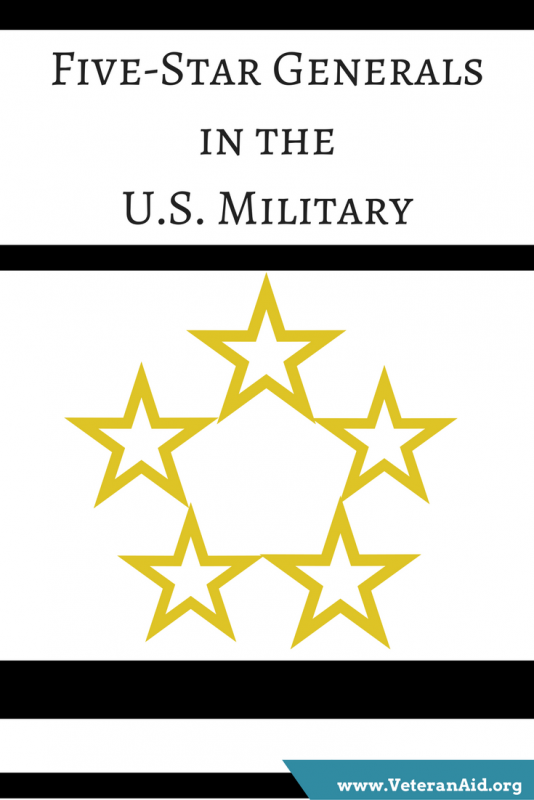 2 Responses to “Five-Star Generals in the U.S. Military”