Who Are the Four-Star Women of the U.S. Military

When the U.S. Navy’s Admiral Michelle Howard received her fourth star – making her the Navy’s second-highest ranking official and the highest-ranking African-American woman ever in any branch of the military – she noted that she had to special-order her four-star shoulder boards since they’d never been made for the Navy before. 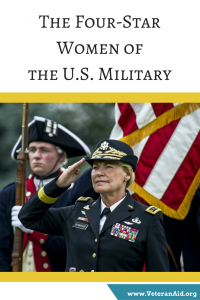 With her promotion, Howard joined a small group of four-star women in the U.S. military, comprised of only two others: General Janet Wolfenbarger (Air Force) and General Ann Dunwoody (Army). And while approximately 15% of the U.S. armed forces is made up of females, these three women exemplify the payoff for hard work that comes to people who do their best work in each and every role they take on, regardless of gender.

Howard graduated from the U.S. Naval Academy in 1982 and from the U.S. Army’s Command and General Staff College in 1998 with a Masters in Military Arts and Sciences. During her Naval career, she has achieved numerous historic “firsts,” including:

She has been awarded numerous medals and awards, including the Navy Distinguished Service Medal and the Meritorious Service Medal. Howard also notably commanded the Navy task force involved in the Maersk Alabama rescue, which became the plot of the film "Captain Phillips."

Credited with being the first female to “crack the brass ceiling,” Ann Dunwoody was the first woman in U.S. military and uniformed service history to achieve a four-star officer rank when she was promoted in 2008. She has previously been the Army’s top-ranking female when she received the promotion to lieutenant general and became the Army's Deputy Chief of Staff, G-4 (logistics).

Although she was the daughter of a career Army officer, Dunwoody always wanted to be a physical education instructor, even from a young age. It wasn’t until her junior year of college when attended a four-week Army introductory program – followed by an 11-week Women's Officer Orientation Course – that she really discovered her “passion for soldiering.” In 1975, she was commissioned as part of the Women's Army Corps, which was disbanded three years later as part of the integration of male and female troops. She became a 2nd lieutenant in the Quartermaster Corps where she learned to jump from airplanes, and went on to become the first woman to be a battalion commander for the 82nd Airborne Division and, later, the first woman to serve as a general at Fort Bragg.

During her career, Dunwoody has also been an avid proponent of sexual abuse prevention in the Army. While she has been outspoken on the fact that she does not believe the Army is a “good old boy” network, she believed more has to be done to decrease sexual assault and in the armed forces.

After more than 35 years of military service, Janet Wolfenbarger retired in 2015, approximately three years after becoming the first female four-star general for the Air Force.  She served as the eighth commander of the Air Force Materiel Command (AFMC) which conducts research, develops, tests and evaluates, and provides acquisition management services and logistics support for weapon systems.

Wolfenbarger, the Air Force’s highest ranking female, was the first woman to achieve four stars in the branch, and was a member of the Air Force Academy's first co-ed class. She went on to earn multiple degrees in engineering and aeronautics, and to serve as an intelligence analyst at Eglin Air Force Base in Florida. She is also a graduate of the Air Command and Staff College, and earned the Legion of Merit and the Meritorious Service Medal during her career.

3 Responses to “Who Are the Four-Star Women of the U.S. Military”