The Difference Between Memorial Day, Independence Day and Veterans Day

Americans enjoy several holidays with their military family and friends. Hot dogs, fireworks, flags and other summertime activities. Thanks to our veterans, we are privileged to have these special days to enjoy our freedoms, 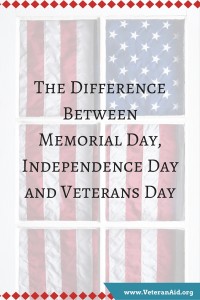 liberties and cultural values. However, many do not realize how our nationally recognized holidays were established nor understand their significance. Here is a quick tutorial on the difference between some of our most beloved ones: Memorial Day, Independence Day and Veteran’s Day.

Few know that Memorial Day originated during the Civil War era. First called Decoration Day, this day was set aside for veterans, families, and civilians to decorate the grave sites of soldiers and servicemen they wished to honor and remember. Believed to be established around 1868, Decoration Day was first suggested by a veteran fraternity, called the Grand Army of the Republic (GAR).  Historical accounts state that GAR wanted a nationally observed holiday for veterans to attend ceremonies and remembrance services without losing a day’s wage.

It wasn’t until nearly nearly 100 years later and long after World War I and II that legislation was passed to put uniformity around national holidays. In 1968, the “National Holiday Act” touched a broad list of celebrated days and prompted national holiday observances to be on Mondays. This is when Decoration Day became Memorial Day. To give more credibility to the holiday, Congress deemed that Memorial Day would be set aside for all war veterans who had died, not only those from the Civil War. This distinction took a couple of years; therefore, Memorial Day didn’t become an official national holiday until 1971. Today we celebrate Memorial Day by visiting grave sites, memorials and attending parades to honor the many military lives lost.

Much like Memorial Day, Independence Day had a slow start. Many speculate that the deaths of Thomas Jefferson and John Adams on July 4th, 1826 sparked a resurgence in the importance of the day. But, it took nearly another 50 years, in 1870, for the holiday be officially recognized by Congress. Today, this holiday is celebrated with picnics, fireworks, the American flag, and lots of family time.

Like Memorial Day, Veterans Day also honors war veterans; however, the distinguishing difference between the two holidays is that Veteran’s Day celebrates all veterans - living or dead. Memorial Day is reserved to honor and pay respects to the military lives that have been lost. Veterans Day is celebrated on November 11th each year. So why do we celebrate Veterans Day?

Unlike Memorial Day and Independence Day, Veterans Day is a relatively new holiday. Originally called Armistice or Truce Day, this day got its name upon the conclusion of World War I. Following subsequent wars, Congress was pressured by a group of veteran supporters to change the name of Armistice Day to Veterans Day. In 1954, Congress passed Public Law 380 proclaiming Veterans Day a public holiday. While there were a few date changes along the way, November 11th is still the date we honor America's veterans for their patriotism, love of country, and willingness to serve.

An Easy Way to Honor Veterans

On any of these given holidays, it's easy to honor our current servicemen and women and veterans in a variety of ways. One of the easiest things you can do (and could potentially be extremely beneficial) to a veteran and/or spouse of a veteran is to inform them of the veterans Aid and Attendance pension benefit that can help them pay for the cost of care. Please refer them to www.VeteranAid.org or have them call (866) 913-2555. So many veterans are missing out on thousands of dollars to help them pay for costs of care. Please help us spread the word of the Aid and Attendance benefit.

2 Responses to “The Difference Between Memorial Day, Independence Day and Veterans Day”