Celebrating Independence Day with Your Veteran Family and Friends

Independence Day may be the single most important holiday we celebrate as a united nation. Focused around celebrating our independence from Britain, Independence Day is the actual day the Declaration of Independence was signed. It is rumored that nearly 86 revisions were made to the famous document before it was finally adopted by the 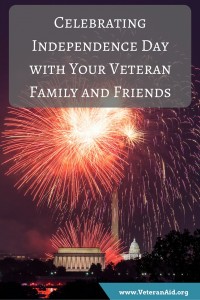 Like with the birth of any new nation; new ideals, values, and promises were forged when the Declaration was created. It proclaimed that each person was entitled to inherent rights, called “self-evident truths”. The Declaration read: “We hold these truths to be self-evident: That all men are created equal; that they are endowed by their Creator with certain unalienable rights; that among these are life, liberty, and the pursuit of happiness.”  With these words, the foundation for democracy was laid and the concept of the United States was established.

Despite popular belief, Independence Day does not have direct ties to the military. Cannons and guns are often fired on July 4th to commemorate and remember the original thirteen colonies and the United States’ journey toward liberty and freedom. For Americans today, Independence Day represents the pride and patriotism we have for our country. It is this representation that draws the parallels between the day and the military. As our active Armed Forces and veterans personify the patriotism and pride we feel on this special day. They exemplify the same traits our founding fathers had when they gathered together in a room, in the face of an impending battle, against an oppressor, to create the concept of a new, and independent nation.

It is in this spirit of patriotism that Independence Day remains an important holiday for all Americans, and possibly even more so for our active and former military. Like our founding fathers, our military stand up to defend and protect our self-evident truths every day. Without their sacrifices and love for country, we would not have a country.

This Independence Day, be sure to thank a serviceman or veteran and give thanks to them for their continued defense against all potential threats to our core values. Our veterans and active Armed Forces continuously help to uphold our democratic ideals, liberties, and ensure all Americans are able to pursue happiness. They embody everything that it is to be an American. Please take a moment to thank them for our continued independence.