Remembering Our Prisoners of War - Missing in Action

It is estimated that approximately 80,000-90,000 military personnel are still missing in action. Sadly, the vast majority are presumed dead. These brave souls are likely buried in foreign unmarked graves or lost at sea. Many of the current prisoners of war or classified missing in action were lost during World World II with a smaller number

listed as missing from recent wars.

These missing soldiers have prompted the creation of several government and civilian organizations. The US Defense Department’s Prisoner of War Missing Personnel Office, known as DPMO, and the Joint POW/MIA Accounting Command, or J-PAC, were some of the first created to identify and match soldier remains with names. In early 2015, these organizations were merged to create a new government group called the Defense POW/MIA Account Agency (DPAA).  Despite these efforts, these offices have only been able to locate and account for about 70 veteran remains each year. The room for improvement is immense.

When did Rolling Thunder start?

It was after a trip in 1987 where Manzo visited the Vietnam Veterans Memorial in Washington D.C. that he first learned that American servicemen were unaccounted for after the Vietnam War. Manzo’s Marine training had taught him to leave no man behind. The idea of lost serviceman stayed with the corporal and he soon began attending POW/MIA vigils to learn more about the missing soldiers. A short year later, the first Rolling Thunder Run to the Wall took place.

Rolling Thunder hosts the Run to the Wall motorcycle rally each year on Memorial Day. Thousands of people, veterans and non-serviceman alike, make the Memorial Day ride to honor and remember those that are still missing in action or prisoners of war. The annual event has brought much notoriety to the organization and helped them drive legislative change as a result.

Incited by passion for the cause, in 2005 Rolling Thunder, Inc. joined forces with the National Alliance of POW/MIA Families to petition the U.S. Government to use the designation “Prisoner of War/Missing in Action” (POW/MIA)”. This specific designation ensures prisoners’ rights and protections remain governed and protected under the Geneva Conventions.

Today, Rolling Thunder and their nearly 90 chapters nationwide work to increase public awareness for POW/MIA personnel. They regularly donate POW/MIA flags to local schools or special interest groups and speak at many events across the country. Members of the organization also volunteer countless hours at the VA hospitals, nursing homes and rehabilitation centers. Rolling Thunder, Inc. also sponsors search missions into Southeast Asia for Vietnam War POW/MIAs. They use these missions to search for the thousands of American military still unaccounted for. Their hope is to increase the match rate of names to remains.

Rolling Thunder is an extremely active and passionate organization that was created to bring public awareness to the serious matter of missing military lives. For those interested in joining Rolling Thunder in their quest to drive POW/MIA recognition and change, visit www.rollingthunder1.com for more information. 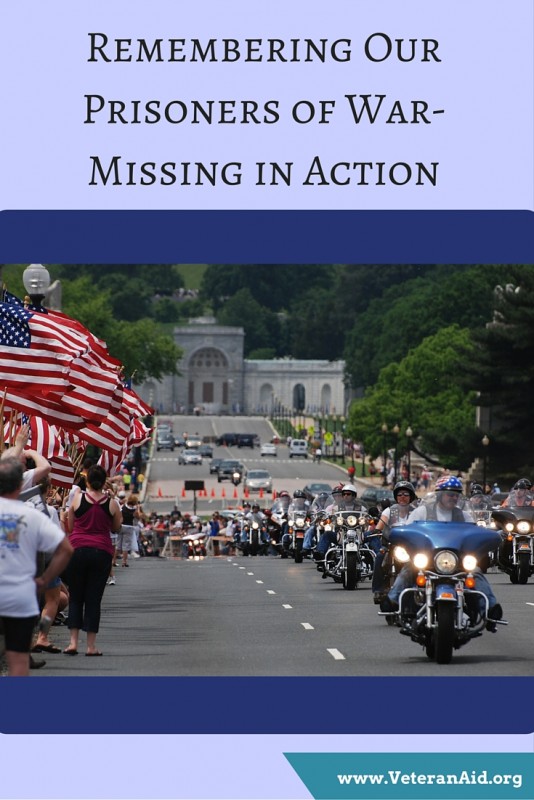 One Response to “Remembering Our Prisoners of War - Missing in Action”