Native American Veterans: 5 Facts You May Not Know

Despite an often-troubled relationship with the government of the United States, Native American warriors have played an important role in the military history of the nation, with service stretching back as far as the Revolutionary and Civil Wars, years before Native Americans would be recognized as US citizens. Statistics show that they have volunteered and served in higher percentages than any other ethnicity, and their special skills and warrior culture have resulted in pivotal benefits and victories for the US Armed Forces, along with a long list of honors and medals.

Here are five facts about Native American veterans that you may not know.

There will be a new National Monument to honor them, opening on Veterans Day, 2020. 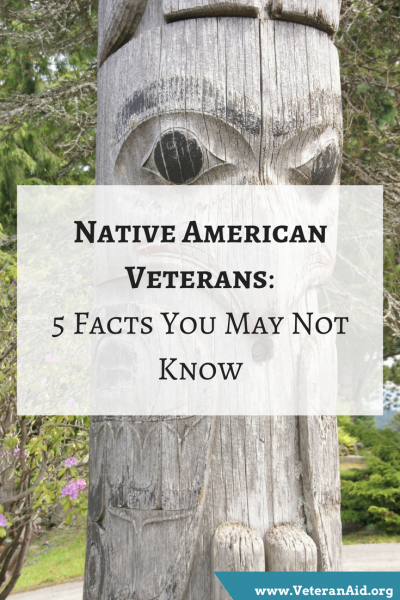 Hawaiian servicemen and women with a prominent memorial on the National Mall, a place that draws nearly 24 million visitors annually to Washington, D.C. The new National Native American Veterans Memorial will be located on the grounds of the museum, between the Smithsonian National Air and Space Museum and the U.S. Capitol. The museum is working with Native American veterans, tribal leaders, historians, members of Congress, and cultural experts to complete the memorial, which will be accompanied by a mobile educational exhibition that will travel through the U.S. in the years leading up to the memorial’s opening. An extensive, multi-day dedication ceremony is planned to dedicate the memorial in 2020, including a procession of Native American veterans on the National Mall. Congress has determined that the memorial must be designed and constructed without the use of federal funds, so the team working on the memorial is currently seeking donations from civilians, veterans, and corporations.

A higher percentage of Native Americans served post-9/11 than any other ethnicity.

Native American have played an important role from the birth of the United States.

More details are emerging showing the importance of female Native American veterans in US military history, reaching as far back as the American Revolution. Historians have only recently rediscovered and verified the actions of an Oneida woman, Tyonajanegen, at the battle of Oriskany during the American Revolution (1775-1783). Tyonajanegen was married to an American Army officer of Dutch descent and fought at her husband’s side on horseback during the battle, relodading his gun for him after he was shot in the wrist. During WWI, 14 Native American women served in the Army Nurse Corps, with two of them serving overseas.  Throughout WWII, nearly 800 Native American women served with units like the Army Corps, the Army Nurse Corps, and the WAVES. Today 11.5% of living Native American veterans are female, compared to 8% of other ethnicities. The Women In Military Service For America Memorial in Arlington is working to encourage Native American female veterans to register (800-222-2294 or 703-533-1155) and add their stories to those they are collecting of the honorable service of Native American Women.

More than 30 other tribes served as Code Talkers, in addition to the Navajo Tribe.

Despite not becoming US citizens until June 2, 1924, the first reported use of Native Americans as code talkers was on October 17, 1918 during World War I, nearly 24 years after the Battle of the Little Big Horn. In 2000, Navajo Code Talkers were honored with Congressional Gold Medals for their services in developing and implementing their traditional Dine’ language as a secret code of communication on the battlefields in both WWI and WWII. Their story was later told in the award-winning feature film, Windtalkers. However, many Americans do not know that members of nearly 32 other Indian tribes served as codetalkers in World War I and World War II and have never been formally recognized for their service to the country. Tribes serving as codetalkers during both the Pacific and European campaigns included Comanche, Cheyenne, Cherokee, Osage, Lakota, Dakota, Chippewa, Oneida, Sac and Fox, Meskwaki, Hopi, Assiniboine, Kiowa, Pawnee, Akwesasne, Menominee, Creek, Cree Seminole Tribes and other unlisted tribes. In World War II, additional tribes aided in the code talker efforts, including Oglala Sioux Tribe, Rosebud Sioux Tribe, Cheyenne River Sioux Tribe, Lower Brule Sioux Tribe, Crow Creek Sioux Tribe, Sisseton Wahpeton Sioux Tribe, and Flandreau Santee Sioux Tribe.

One Response to “Native American Veterans: 5 Facts You May Not Know”