With the high cost of production, and the extensive time and manpower investment of prototyping and perfecting military aircraft, it’s perhaps not surprising that when the U.S. military finds an effective and beneficial aircraft design, it holds on tight. Amazingly, even though aviation has only been a possibility for a little over 110 years, a handful of U.S. military aircraft have been in service for more than 50 years. To be fair, many have undergone revamps and necessary upgrades over the years – including the oldest B-52s that have been “frankensteined” into their current operating versions – but the tried and true designs of the 1950s remain 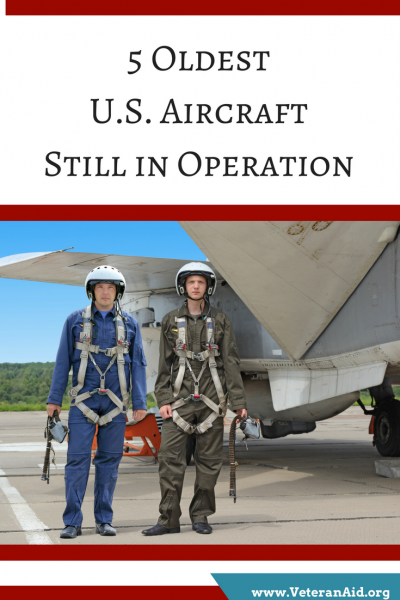 While there is some debate over what constitutes the “oldest” and what can be considered “still in service,” the following five aircraft top the list of the longest serving U.S. military aircraft.

(Operating since 1955): The Boeing B-52 Stratofortress is a long-range, subsonic, jet-powered strategic bomber, designed and built by Boeing. It has been operated by the United States Air Force (USAF) since the 1950s, with expected plans to keep the aircraft (with design maintained and updated throughout the years) in service until the 2040s for a 90 year lifecycle. Superior performance at high subsonic speeds along with relatively low operating costs have kept the B-52 in service despite later, more modernized designs. The bomber primarily provides the USAF with immediate nuclear and conventional global strike capability, and is capable of carrying up to 70,000 pounds (32,000 kg) with a combat range of more than 8,800 miles without aerial refueling.

(Operating since 1952): Also known as the Skywagon, the Cessna 180 is a four- or six-seat, fixed conventional gear aircraft introduced into military inventory in 1952. The popular 182 and 185 were added to service shortly thereafter, offering a strengthened engine and fuselage. The 180 was popular for bush flying and the transport of passengers and freight to remote, austere airstrips, lakes and snowfields. As part of the United States Military Assistance Program, Cessna received a contract to supply the USAF with Skywagons (labeled U-17A and U-17B) to participating countries overseas.

(Operating since 1957): The Boeing KC-135 Stratotanker is a military aerial refueling aircraft initially tasked with refueling strategic bombers, but was used extensively in the Vietnam War and later conflicts such as Operation Desert Storm; it made 813,000 aerial refuelings during the 9-year Vietnam conflict, and during the Persian Gulf War, completed 18,700 hookups and transferred 278 million pounds (126 million kilograms) of fuel. Its basic features make is resemble a commercial Boeing 707 or 720 but its primary purpose of extending the range and endurance of US tactical fighters and bombers.

(Operating since 1955): The Lockheed U-2 – known as the Dragon Lady – is a single-jet engine, ultra-high altitude reconnaissance aircraft operated by USAF and also previously flown by the Central Intelligence Agency (CIA). Created from the need to avoid Soviet radar detection and anti-aircraft weaponry during surveillance missions, the U-2 flies more than 10,000 feet higher, 100 mph faster, and with larger bandwidth links than any other high-altitude ISR platform. It provides 24/7, all-weather intelligence gathering, and has been used for electronic sensor research, satellite calibration, and communications purposes. The earliest versions of the aircraft flew numerous recon missions over the Soviet Union, China, Vietnam, and Cuba. More updated versions have taken part in recent conflicts in Afghanistan and Iraq, and supported several multinational NATO operations, as well as peacetime monitoring missions.

(Operating since 1949): The U-6A Beaver is the military version of the deHavilland DHC-2, manufactured in Canada and used for many years by commercial industry for messenger service, light cargo transport, and reconnaissance duties. The United States purchased 970 U-6As for the primary purpose of aerial evacuation of litter and ambulatory patients, as well as courier service, passenger transport, light cargo hauling, reconnaissance, rescue, and aerial photography. Additionally, the Beaver is used at the U.S. Naval Test Pilot School (TPS) to help gliders get to altitude via a towline.