It’s mind-boggling to realize that less than 60 years after the first successful flight of a powered aircraft at Kitty Hawk field, Unite States pilots would be able to transport an exponentially increased amount of cargo and equipment across long distances, even refueling mid-air. The use of massive, powerful aircraft undoubtedly changed the course of military history, and the U.S. acted as a top innovator in large-scale aircraft. Below are five of the largest U.S. military aircraft that have been delivering cargo, manpower, and even humanitarian aid for decades.

Manufactured by Lockheed Martin, the C-5 Super Galaxy is the largest and only strategic airlifter in the United States Air Force 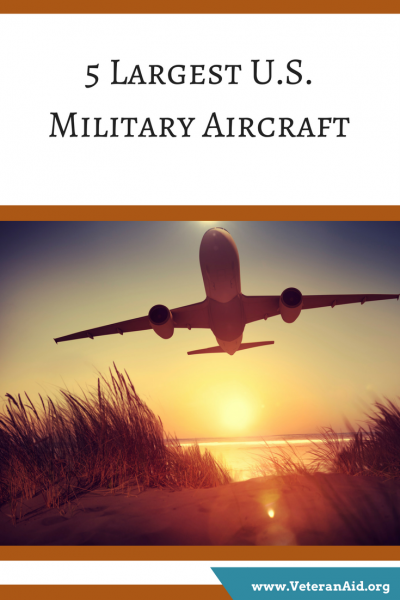 (USAF). It can carry more cargo farther distances than any other aircraft and can haul twice as much cargo as any other airlifter. With a payload of six Mine Resistant Ambush Protected vehicles (MRAPs) or up to five helicopters, and can and can take off with a maximum weight of 381 tons, including a payload of 129,274kg.

Delivering cargo in every worldwide operation since the 1990s, the Globemaster is a high-wing, four-engine, T-tailed military transport aircraft. It can carry large equipment, supplies, and troops on long-haul trips to small airfields in harsh terrain and unpredictable conditions. It was developed by McDonnell Douglas (now Boeing) and has a maximum takeoff weight of 265.3 tons and payload capacity of 74,797kg.

In continuous production longer than any other military aircraft, the Super Hercules is manufactured by Lockheed Martin and claims more than 1.2 million logged flight hours of combat, humanitarian, special operations, aerial refueling, firefighting, and search and rescue missions around the world. This rugged aircraft can transport more than 40,000 pounds of cargo and is often the first aircraft to touch town during a mission, even able to operate out of 2,000-foot long dirt airstrips in mountain ranges. Interestingly, this aircraft uses props rather than the jet engines of most other large cargo aircraft.

Of the 744 B-52s built by Boeing between 1952 and 1962, 76 still remain in active service, marking more than 50 years in the air, with projections to keep them flying until at least 2040. The eight-engine, 390,000-pound (176,901-kilogram) jet was America’s first long-range, swept-wing heavy bomber. It began as an intercontinental, high-altitude nuclear bomber, and was later modified for low-level flight, conventional bombing, extended-range flights, and transport of improved defensive and offensive equipment (including ballistic and cruise missiles that can be launched hundreds of miles from their targets). The aircraft recently received technology upgrades in their communications displays, radar systems, and weapons bays, allowing them to carry smart bombs.

Designed specifically for aerial refueling, the Stratotanker first rolled out in 1956 and for 15 years was the only tanker used by the Strategic Air Command (SAC). More than 600 of the 732 tankers built were still in service in the mid-1990s, having made 813,000 aerial refuelings of combat aircraft during the Vietnam conflict, and 18,700 hookups during the Persian Gulf War. Modifications and upgrades that extended service capabilities included re-skinning the wings with an improved aluminum alloy and installing more powerful and fuel-efficient engines. In 2011, Boeing began development of the K-46 aerial refueling tanker, to replace 179 of the USAF’s 400 KC-135 tankers.