Life as a military spouse means life with the military. The work your groom- or bride-to-be conducts as a Marine, Airman, Sailor, or Soldier will undoubtedly be a huge part of your married life together, and many couples choose to reference the military in their wedding ceremonies and receptions by showcasing some military traditions. 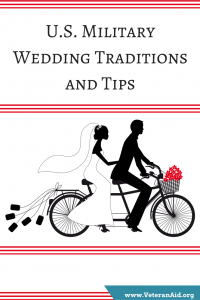 The main designation of a “military wedding” is that one or both members must be a part of the U.S. armed forces. While a military wedding does not have to be held at a military chapel, some couples do choose to use an on-base location as it is convenient, represents an important part of their lives, and can be used for free (a donation is typically expected). Just like civilian venues, however, you may need to reserve popular locations very far in advance, sometimes applying for the reservation in writing to your chaplain’s office.

If your marriage is to be performed by an active duty military chaplain, there is no fee, although a small honorarium is typically given (some recommend starting with around 10% of the cost of the reception, but whatever you can afford is appreciated). The chaplain may require a couple to attend pre-marital counseling classes, and can also be a resource if and how you can add your own decorations and flowers to the chapel, along with what type of music is allowed in the ceremony. Military custom dictates that the chaplain and his spouse should be invited to your reception so don’t forget them on your invite list. You may use a non-military official for your ceremony, on- or off-base.

Another popular option for military wedding location is the service academy attended by the bride or groom (or both), and most academies have their own chapels. Officers' or enlisted clubs onsite can also provide a good option for receptions, although receptions can also be held in the traditional hotels or restaurants.

Military members within a wedding party typically wear full ceremonial dress uniforms, based on the season and formality of the wedding. Blues are typically used in the winter while whites are used in the summer. For officers, evening dress uniform is equivalent to civilian white tie and tails, while dinner or mess dress uniform is in equivalent to civilian black tie. In the case of non-commissioned officers, dress blues or green uniforms may be worn at formal or informal weddings. Wearing a uniform to the wedding as a guest is optional.

All members of the military in the wedding should wear the same level of formality in uniform, although the ceremony may include service members from different branches. No boutonnieres are to be worn with uniforms. In some cases, male members of the wedding party may choose to change into a traditional tuxedo or other attire for the reception, especially if it is off-base or not at a military installment.

A female servicemember may choose to be married in either her uniform or a traditional white dress, and she may hold a bouquet in either case. If the groom is in the military and chooses to wear a cutlass or sabre (depending on his branch of service and whether or not he's a commissioned officer), the bride stands on the right side of the groom rather than the left as in traditional ceremonies, to avoid the blade.  Any member of the wedding ceremony carrying a sabre must wear white gloves, with the exception of the groom and best man, as they will be handling the rings.

One of the more memorable traditions for military weddings is the bride and groom leaving the reception under an arch of swords or sabers. The arch is an old English and American tradition that represents a pledge of loyalty to the newly married couple from their military family. On most bases, at least one chapel or honor guard usually has sabers available for wedding ceremonies but rifles may be used if sabers cannot be obtained.

Only commissioned officers are permitted to carry sabers or swords and participate in this ceremony that typically consists of 6-8 servicemembers wearing white gloves (the Marine Corps is an exception, with NCOs also authorized to carry them). Often the military groomsmen conduct the arch, but other officers – such as ushers of selected guests – may be designated to help,

The arch usually takes place on the steps or walkway leaving the chapel, although in some cases you can get permission to do it in the chapel itself, at the reception, or both. While there are numerous small differences in the arch based on the branch of service, the bride and groom traditionally walk under the arches of the sabers, and when they reach the end, the sabers are crossed to momentarily delay their departure. At this point, the bride is often tapped on the backside by the non-edge side of the sabre and welcomed to the branch of service. This step is omitted if the bride is in the military.

Military wedding receptions can be held on-base at locations like officers’ or enlisted clubs, or some couples choose more traditional civilian locations like hotels, restaurants, or other event venues. An expected part of a military wedding is the receiving line, and protocol requires that a uniformed groom precede his bride in a military receiving line. The receiving line is a great opportunity to reinforce your military theme by placing the American flag with the branch flag, directly centered, behind the line.

If your reception is relatively formal with a seating chart, it’s helpful to seat guests by rank and title so captains sit by captains and sergeants sit by sergeants. This is a good chance to learn more about military ranking if you do not yet know it; it will be helpful when introducing your guests at the reception. The reception is also a great time to add references to your military connection through decoration and gifts. Cake toppers for the bride or groom can reference American patriotism or a specific branch, while there is a wide range of gifts for groomsmen and bridesmaids – like engraved glasses, cufflinks, and jewelry – that can be customized for a specific branch.

Another popular tradition at a military reception is using the sword or saber to cut the cake. Typically the groom hands the bride the unsheathed saber or sword, she takes it, then he places his hand on hers to cut the cake together. The saber must remain undecorated during this tradition, and it’s important to clean it thoroughly after use to ensure it is not damaged.

These traditions and customs are an excellent way join your military family with your new family, as you begin a new chapter in your life. As an active servicemember or a veteran, your time spent in the U.S. military will always hold an important place in your heart and mind, and incorporating it into an special even like your wedding can be a meaningful and memorable undertaking. 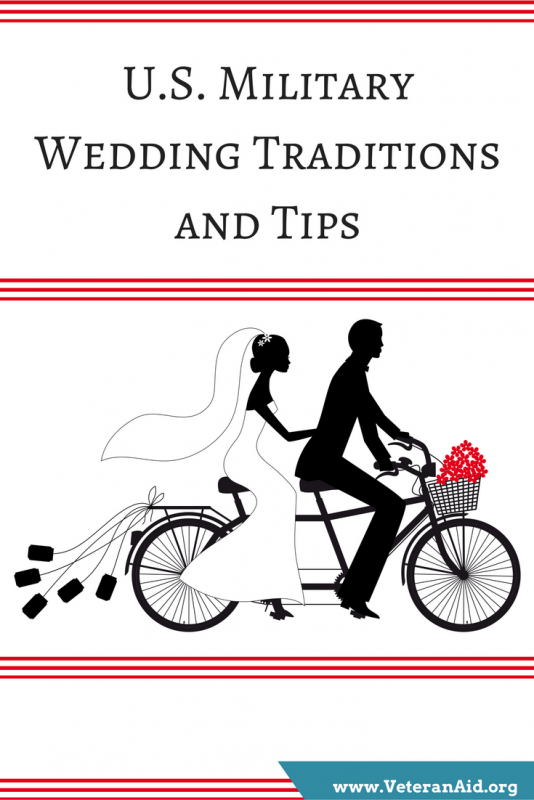