War dogs are not a new trend. The first historical reference to them comes from ancient Turkey around 600 BC. The first ruler, Alyattes had his soldiers release packs of dogs on rival troops during battle. The attack dogs were incredibly effective at startling and scaring the enemy cavalry horses. Beyond serving as attack dogs, canines have 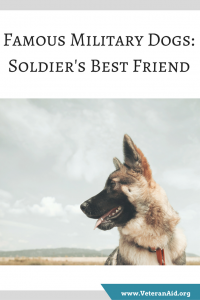 become extremely adept at aiding soldiers with a variety of war-time services such as: locating explosives, leading soldiers out of harm’s way, finding injured or hidden individuals, as well as providing cosmpanionship in the field.

Despite their value on the battlefield, not all dogs are suited for war. Through careful training and years of experience, the military has comprised a list of breeds that make the best war dogs. German shepherds, Labrador retrievers, and  Belgian Malinois, remain at the top, yet a variety of breeds have had great wartime success. It is estimated that the US Armed Forces employees nearly 2,500 military war dogs in the field today. Let’s take a look at some of these hero dogs and how they earned their hero statuses.

The War on Terror was well underway in 2011 when Cairo was brought along on Operation Neptune Spear. As a young and eager Belgian Malinois, Cairo was a welcome addition to the Navy SEAL special ops team tasked with locating and killing Osama Bin Laden. Outfitted with tactical, surveillance and field support equipment, Cairo patrolled Bin Laden’s compound and helped to secure the perimeter. Cairo is partially responsible for keeping members of Navy SEAL Team 6 safe during their historical raid that lead to Bin Laden’s capture.

In the winter of 1966, Nemo and Airman 2nd Class Bob Thorneburg were on patrol at a cemetery near their airbase in Vietnam when they found themselves under enemy fire. In an effort to protect his handler, Nemo, a brave German Shepherd, took a bullet in the eye. Airman Thorneburg was shot in the shoulder. Upon being hit in the shoulder, Nemo aggressively attacked the Viet Cong to allow Thorneburg the time he needed to call for backup. Shortly after making the call for additional military support, Thorneburg fell unconscious. Nemo crawled on top of the Airman’s body to protect him until help arrived.  Without his valiant efforts, 2nd Class Thorneburg would not have survived.

Rags was not a “standard” military dog breed. He was a Cairn Terrier mix who served as the mascot of the 1st Infantry Division during World War I. Rags’ talent wasn’t discovered until his owner, Private James Donovan, was deployed into the field. Fearing for Rags’ life, Donovan left him back at base. To the amazement of his master, Rags found him fighting in the trenches. Private Donovan, recognizing Rags’ talent of finding people, was then trained to run messages between soldiers and camps. His heroic efforts saved many lives throughout WW I.

Surprisingly, it was not until November of 2015 that military dogs were returned to the US after serving in other countries. Prior to that, their fate was largely unknown. Some were abandoned, or passed around from soldier to soldier until the poor animal eventually passed away. President Obama changed all of that in 2015 by signing a law to guarantee the safe passage and return of all retired US military dogs. This law provided necessary funds for their flights home. As a result of these efforts, several non-profits have also been established to help transport those animals to their former handlers wherever they may reside within the United States. Finally, a fitting end for some of the bravest soldiers on the field.