7 Little-Known Facts About the 9/11 Memorial Museum

Seven stories below the place where the North and South Towers of the World Trade Center (WTC) once stood is a beautiful and somber memorial to the nearly 3,000 people who lost their lives on September 11, 2001. The 9/11 Memorial Museum opened its doors to the public in May 2014, and has since hosted more than 5 million people. Below are seven little-known facts about this 110,00 square-foot space that today helps remember, educate, and 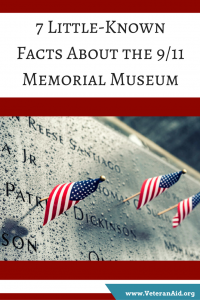 A Museum Inside a Piece of History

The 9/11 Memorial Museum is actually built within an artifact of 9/11 itself; visitors descend through a steel and glass building to the depths of the WTC foundation below the memorial park. The atrium and entrance of the museum are supported by two giant steel “tridents” that are remnants of the North Tower’s structure. When visitors reach Foundation Hall, they see the exposed slurry wall of the original foundations of the WTC, built in the 1960s and miraculously still standing after the destruction of 9/11. The museum and the memorial occupy about eight acres of the original WTC site.

Visitors Can Add Their Voices

As part of the  “Reflecting on 9/11” gallery, visitors can go into a video booth and add their own memories and perspective to the oral history housed in the museum. All testimonies are stored as part of the Museum’s oral history collection, and some may even be selected for use in a dynamic media presentation shown in the gallery.

Several large artifacts in the museum had to be lowered into their places by crane, including “The Last Column,” a 60-ton steel beam that became a shrine to victims, and the Vesey Street Stair remnant known as the “Survivor Staircase” which was the escape route for hundreds of survivors. The damaged fire truck from FDNY Ladder Company 3 that lost 12 men on 9/11 was also lowered in by crane, and had solemn tribute ceremony to honor its return to the site.

Above the museum, the large Memorial park features two large, square reflecting pools that outline the footprint of where the North and South Towers stood. The pools are each fed by 30-foot waterfalls – the largest man-made waterfalls in North America – and spill into deeper holes in the center of each square. The trees that fill the park are swamp white oak trees, selected from nurseries located in New York, Pennsylvania, and Washington, D.C., symbolizing the areas impacted on 9/11.

With more than 10,000 artifacts making up the entire collection, about 10% of the collection is on display to the public at any given time. Many artifacts rotate on a regular basis, with the tallest artifact reaching almost 84 feet high, and the smallest, less than an inch in height. The collection is comprised of 23,000 images, 500 hours of moving images, and 1,970 oral histories.

Even if you can’t make it to the museum itself, you can download and listen to a free audio tour of the museum, available on iTunes. Narrated by longtime New Yorker Robert DeNiro, the guided tour gives the stories behind the artifacts and includes moving personal accounts from survivors and first responders. It is available in 9 languages, and also offers an age-appropriate version for children, as well as a “building history” version that gives perspective from architects, recovery workers, and preservationists who worked on the recovery and rebirth of Ground Zero.

Visitors to the museum can learn more about specific artifacts through a series of daily talks that take place at noon, with a museum staff member offering a detailed discussion and behind-the-scenes stories about one specific artifact. Additionally, every Tuesday afternoon at 4 p.m., survivors or family members talk about their experiences in a regular program called “We Were There.”