Deployment is a difficult yet expected part of the U.S. military experience. It impacts an entire family and community, disrupting regular life and routine, and leaving a family behind to count the days until the loved one’s return. Thankfully, the Armed Forces offer many support services to families of the deployed, but it can still be a 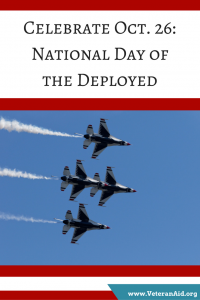 challenging time for both the deployed and those waiting at home.

In 2006, North Dakota resident Shelle Michaels Aberle decided to take action to honor U.S. military personnel who were currently deployed, just like her cousin, LTC David Hosna, who had been deployed to Iraq from Kaiserslautern, Germany. She petitioned then-North Dakota Governor John Hoeven to proclaim the first official “Day of the Deployed” on Oct. 26, which also happened to be her cousin’s birthday.

Soon after, the Day of the Deployed celebration spread to other states, and in 2011, Hoeven (who by then had become a senator) led the efforts to establish it as a national day of recognition, honoring all deployed military personnel and their families. In 2011, the U.S. Senate passed an unanimous vote to make the day a National day of honor and by 2012, all 50 states celebrated the day on Oct. 26.

Deployment to a foreign country impacts more than 150,000 of the nation’s 1,302,941 total military personnel worldwide. After WWII, the United States developed an extensive network of bases and around the globe, establishing a presence in 150 countries, more than 75% of the world’s nations. Maintaining this global presence takes dedication and commitment from the United States’ all-volunteer force, and during deployment especially, the entire military family makes sacrifices.

There are many simple but important ways civilians, veterans, and other military personnel can celebrate the National Day of the Deployed. If you are looking to help families of the deployed, you don’t have to look far in your community to find someone impacted by deployment (Create the Good has an excellent step-by-step guide to get started). Check with your local veterans service organizations, or, if you live near a military or guard base, contact the base’s Family Resource Center.

In honor of their deployed family member, you can offer to help with small house chores like yard work, or you could drop off a hot meal or sweet treat for the family. Have your children or grandchildren make handmade cards of thanks, or just offer your own with a note or in person. These small gestures remind the family of the deployed that we see the sacrifices they are making, and that they are not alone.

The organization Soldiers Angels has an entire division established to show support to deployed military personnel, like teams focused on letter writing and preparing and sending baked goods, as well as teams supporting specialized groups like special ops, female military members, and chaplains. You can volunteer and even adopt a deployed servicemember to ensure they feel the love and support of their nation while they are away from home.

Organizations like Blue Star Families focus on supporting military families, especially in times leading up to and during deployment. The group often hosts special events for military family members, like trick or treating on base or book fairs, and these events are a great opportunity for civilian volunteers to show they care.

An even simpler way to spread awareness of the military personnel and their families serving through a deployment is to make a post on social media, using the hashtag #DayOfTheDeployed. This simple act can raise awareness to your social media network and may encourage others to reach out in support of our servicemembers and their families.

Take a moment this October 26 to pause and remember the military personnel and their families who are undertaking a difficult time of separation in order to fulfill their commitment to the Armed Forces and our nation. They do it with an honorable, willing attitude, but the support of their nation can help lighten the burden.