The Forgotten Warrrior Memorial Wall Honors the Casualties of PTSD

When a veteran returns home, he or she can expect to be welcomed by the gratitude of a thankful nation. Every service member who has signed up for duty has sacrificed in some way, knowing that their decision to serve may be life altering, especially for those who return gravely injured. But sadly, for thousands of veterans, their war continues 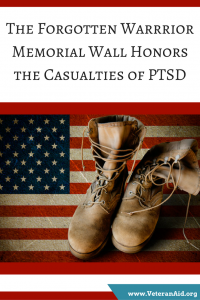 even after they’ve returned home, with an invisible battle raging inside their minds.

Every day, more than 28 U.S. veterans lose the battle with post-traumatic stress disorder (PTSD), a condition of persistent mental and emotional stress that occurs as a result of injury or severe psychological shock, common in war. PTSD can cause hyper-vigilance, sleeplessness, emotional distancing, and triggered reactions to specific noises, sights, or experiences.  Many veterans suffer in silence, self-medicating with drugs or alcohol, with an alarming rate finally succumbing to suicide.

Although the disorder has become more widely known in recent years, this invisible battle continues to claim its casualties, leaving families and communities shocked and saddened. The Chicago-based nonprofit K9s For Veteran Warriors has decided to take action, working to create a new memorial that not only offers a place of comfort and healing for the families of those who have died as a result of PTSD, but aims to shed more light on the deadly struggle that so many are losing.

The Forgotten Warrior Memorial Wall will be erected in Channahon State Park, just outside Chicago, in November 2016 and will be constructed in an existing circular area of the park. It will be made mainly of granite and will honor all five branches of the U.S. military and give people a place to come and remember and honor their loved ones. Families and friends can have a memorial brick etched with a loved one’s name to be included in the memorial.

K9s for Veteran Warriors CEO and U.S. veteran Michael Tellerino explained that there was no existing memorial for servicemembers whose lives were lost as a direct result of PTSD, although they were true heroes who should be considered casualties of war. Although their wounds were invisible, they were no less painful and difficult to recover from, and society often ignores them, writes them off as weak substance abusers, or turns away after they lose their battle with the disorder. In reality, their disorder is a real injury of war, and more needs to be done to encourage them to get help and to find effective ways to help them recover before it is too late.

Tallerino and his organization beleive that the new memorial will give families and friends a place to come and honor and remember their loved one, while also shedding light on the major problem of PTSD in the United States. They hope the memorial and news of its opening will help encourage veterans to talk about their own struggles and get help, showing them that they are not alone and that the American public support them in their ongoing struggles.

The memorial, which will cost around $80,000, was funded with individually contributed donations. Organizers chose Channahon because it has easy access from the Chicago metropolitan area and is also relatively close to Marseilles, home to the Middle East Conflicts Wall Memorial along the Illinois River. Illinois State Parks and Recreation and state legislators have already signed off on the project.

K9s For Veteran Warriors, NFP, provides service dogs to veterans with PTSD, along with medical care and food for the life of the dog, at no cost to a veteran. The organization trains the dogs and provides them to any veteran in need, not just post-9/11 vets who served in combat. The presence and the companionship of the highly trained dog can help a veteran continue his or her fight against PTSD, and improve quality of life greatly.