History has shown that war and its unique challenges can not only spark the creativity of the world’s inventors, but also open up a government’s willingness to give even the weirdest weapons a try. Below are five little-known weapons that were conceptualized, tested, and, in some cases, even deployed to try to sway the direction of war. Most 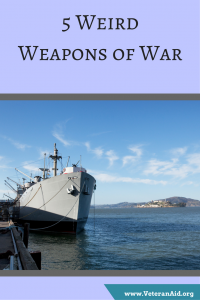 were not successful, but all are fascinating.

Due to the shortage and high cost of aluminum and steel during WWII, British inventor  Geoffrey Pyke proposed and created a stronger-than-ice mixture called “pykrete,” comprised of 86 percent water and 14 percent wood pulp. The British government, looking for ways to supplement a shortage of aircraft carriers and steel for the battle against German U-boats, began a 1,000-ton scale model of a pykrete carrier in Canada, calling it Project Habakkuk. But when the problem of “cold flow” became to great – basically meaning the ship would need an exponential amount of increased steel, a refrigeration system, and more insulation not to melt – the project stalled out and was eventually scrapped.

In looking for non-lethal ways to maintain perimeter security and improve crowd control, the U.S. government developed a mobile heat ray gun – or Active Denial System – in 2010. This device, basically a large satellite dish mounted to a military vehicle, could direct a single high-powered beam of 95 GHz at a target, penetrating the top layers of skin and causing a burning sensation that could only be withstood for 5 seconds or less. Once the target moved away, the sensation completely disappeared with no lasting effects or burns. The ADS was deployed to Afghanistan but never saw conflict, and was eventually recalled to the U.S. due to questions about how factors like weather and even clothing would impact its effectiveness. Researchers are currently working on a smaller version for possible use by domestic law enforcement.

The VZ-1 Pawnee was a one-man aircraft comprised of a seven-foot circular platform for a single pilot to stand on and contra-rotating ducted fans to create lift. The platform was developed starting in 1953 under a U.S. Office of Naval Research contract to Hiller Aircraft, and flew successfully beginning in 1955, although never seeing active conflict. The pilot steered the craft by shifting his weight, which was later considered ineffective compared to regular helicopter controls. Though prototypes flew well, the U.S. Army judged them to be impractical as combat vehicles because they were small, limited in speed, and barely flew out of the ground cushion effect. Two of the six prototypes survive today in U.S. museums.

The Boeing YAL-1 Airborne Laser has been described as the closest thing to a real Death Star, housing a megawatt-class chemical oxygen iodine laser (COIL) inside a modified Boeing 747-400F. Designated in 2004, its primary design was as a missile defense system to destroy tactical ballistic missiles. Unfortunately, the weight of the laser cartridges limited the aircraft to only carrying six at a time, and the aircraft would have to fly relatively closely to targets for effective impact. In 2015, the Missile Defense Agency began efforts on a new aircraft that – rather than being a manned jetliner containing toxic chemicals flying at 40,000 feet, firing from a range of tens of kilometers – would carry an electric laser, flying unmanned at 65,000 feet, firing the same power level at targets potentially up to hundreds of kilometers away for survivability against air defenses.

In 1944, the Japanese set sail 9,000 “fire balloons” – or Fu-Gos – over the Pacific Ocean, in hopes that they would float on the jet stream for three days and reach the U.S. mainland and Canada, causing fires and wreaking havoc. These 33-foot-diameter hydrogen balloons each held a 35-pound high-explosive bomb and eight 15-pound firebombs. Only 389 made it to the U.S., and even fewer exploded. Two landed back in Japan. Although they were ineffective as weapons, these war balloons were the first-ever weapon capable of intercontinental range and held the record for the longest ranged attacks ever conducted in the history of warfare until the 1982 Operation Black Buck raids during the Falkland Islands War. 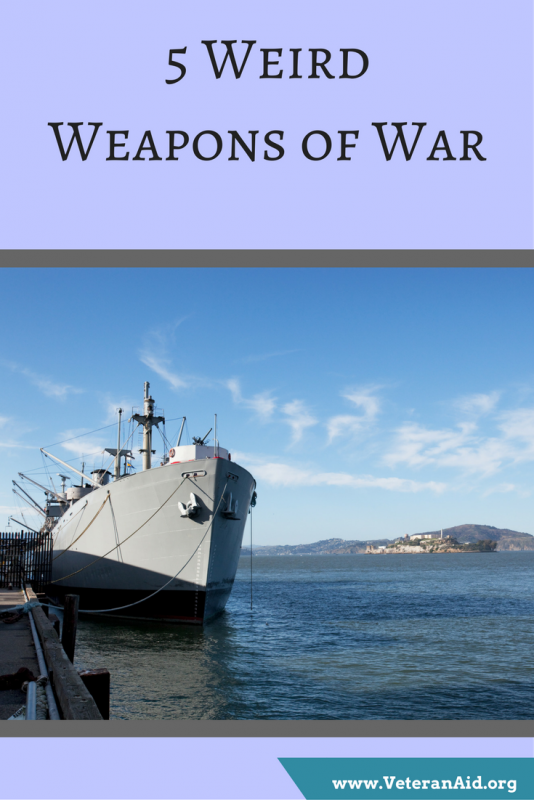