How would you like a $120 million head start on your next construction project? How about 9 foot-thick walls, a glass  roof that can withstand 500 mph winds, and a multi-level structure that can literally withstand a nuclear blast?

Sounds pretty good. The only catch: the majority of the building is actually underground, will most likely take a ton 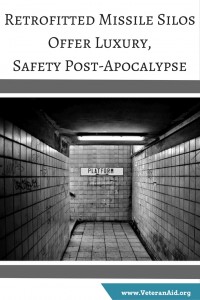 of rehabilitation, is probably located in the middle of nowhere, and once housed a nuclear missile.

Still, for a handful of developers and private citizens with deep enough pockets – the cost of flipping these structures easily stretches into the millions – former U.S. government missile silos have become a unique, super-secure, and even “luxury” housing option, aimed at the “doomsday prepper” crowd.

Similar to how it sells de-militarized vehicles to the public, the U.S. government is always looking for ways to recoup its investment in retired government property, and missile silos are no different. During the Cold War, hundreds of silos were spread out across the U.S., most in unpopulated areas to avoid civilian casualties in the case of an enemy strike. These facilities housed expansive, cavernous holding bays for U.S. missiles, along with full systems of operational support equipment, control rooms, intensive security systems, and networks of maze-like tunnels.

With the end of the Cold War, most were, by agreement, disarmed and effectively abandoned. Despite the extraordinary cost of building these units, the cost to retrofit them with current technology outweighed the benefits, not to mention that mobile weaponry units are today considered a more secure and strategic alternative. So many of these complexes sat for decades, empty and decaying, hidden from plain sight and oftentimes flooded beneath local water tables.

Eventually, through the U.S. Formerly Used Defense Site (FUDS), real estate developers with big ideas and plenty of funds saw the opportunity to make something unique and special for a very specific target audience. As of 2015, there were 60 former missile silo sites available, and developers like the company Survival Condos have begun retrofitting – and already selling out – former missile silos like the Atlas “F” silo in Kansas. Survival Condos is currently wrapping up its second “resort,” taking reservations for the condos that will set you back $3 million for a full-floor suite and $1.5 for a half.

The massive structure includes up to 54,000 square feet of protected space and can house up to 70 people, with the majority of the structure stretching doors and floors below the earth’s surface. The unit is topped with a monolithic dome of curved glass that can withstand more than F-5 tornado-force winds, and houses the community pool, a large mural, and shared dog park.

The resort offers the full range of luxury amenities you might expect (classroom/office center, stainless steel appliances, big screen tvs, rock climbing wall, theater, etc.), along with post-apocalyptic must-haves, like enough food and resources to support residents for up to five years off-grid. Additional features like an extensive security system, redundant air filtration (Nuclear, Biological, and Chemical (NBC) filtration), onsite weaponry, aquaponic farm, and general store promise residents a comfortable life, even after global disaster. Condos even include digital “windows” that show imagery of scenic outdoor landscapes to help with cabin fever. The company has developed three top secret contingency plans that promise to help condo owners get to the shelter safely in the event of such a disaster, although the condos are open to owners at any time.

Other similar sites, such as those developed by Vivos, offer a range of locations with varying levels of pricing, privacy, and number of residents, both in the U.S. and also in Europe. According to the Vivos, website, their goal is to create a vast network of shelters that could house one out of every 1 million humans in the case of global disaster. Spots in these hardened structures are substantially more affordable depending on the privacy level you choose, with discounts available to potential residents with desirable skill sets. The company also offers private development for customers who want to develop a shelter in a specific location, as long as they have the budget to support it.

So life after a global disaster might not be as stark as one might imagine, as long as you have the budget and forethought to reserve your spot in one of these retrofitted silos. With global unrest in the economic and political realms, these hidden communities just might be growing in popularity in the years to come.