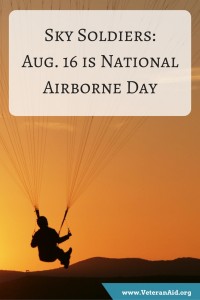 It’s a unique greeting and response between Army paratroopers, the “soldiers of the sky.” They are considered three-time volunteers, first volunteering for military service, then volunteering to jump from a plane, and finally volunteering for combat on a recurring basis, often with little advanced notice.

Big thinkers have pondered the concept of airborne soldiers for hundreds of years. After the invention of the hot air balloon in 1784, Benjamin Franklin wrote to a friend that “ten thousand men descending from the clouds” could “do an infinite deal of mischief before a force could be brought together to repel them.”

Though the U.S. military considered the development and use of Airborne forces in WWI, it wasn’t until November 1942, that members of the 2nd Battalion, 509th Parachute Infantry Regiment, conducted America's first true combat jump, leaping from a C-47 aircraft behind enemy lines in North Africa.

Since then, airborne tactics have played a vital role in conflicts throughout history and around the globe, including D-Day, the Battle of the Bulge, the invasion of Southern France, and conflicts in Korea, Vietnam, and Afghanistan. They are also often an important element of peacekeeping operations, like in Panama, Grenada, Desert Storm, Haiti, Somalia, and the Balkans.

One of the most famous of U.S, airborne operations was “Operation Neptune,” part of the Normandy landings on D-Day, June 6, 1944. Airborne forces were tasked with securing the flanks and approaches of the landing beaches in Normandy, and, though widely scattered by poor weather and poorly marked landing zones, the 82nd and 101st Airborne Divisions succeeded. They secured the western flank, though with heavy casualties; all together, airborne casualties in Normandy totaled around 2,300.

Key to the effectiveness of airborne forces is the element of surprise, since paratroopers and other airborne forces are inserted into areas not easily reached by land. Though they are defenseless in transit, they appear with speed and surprise, a tactic that can shift military advantage against the enemy. They can also be effective in re-opening a landing zone that has been damaged by the enemy, dropping in to secure and repair a landing strip.

Paratroopers often are dropped with a limited number light, non-armored vehicles and guns, so their presence must be quickly supplemented with additional ground forces, or be resupplied often by air. In World War II, paratroopers were dropped with light motorcycles for transit, and after the Korean War, larger vehicles light enough to be dropped by parachute were developed, such as the M551 Sheridan tank.

Around the U.S. and even in some combat zones, soldiers and civilians will pause on Aug. 16 to celebrate the history and impact of U.S. airborne forces. Paratroopers from the past and present will gather to reminisce, while air displays will celebrate the combat jumps that have helped put American boots on the ground in the harshest of conditions. They will share their stories, remember brothers they’ve lost, and honor the spirit of the airborne combat soldier.