5 Famous Astronauts who Served in the Military

There seems to be a clear alignment between military veterans and astronauts; in fact, more than 66 percent of former and current astronauts are vets. The dedication and discipline needed to complete training, the willingness to take on challenging and dangerous missions, and the flight and other technical experience make military veterans an 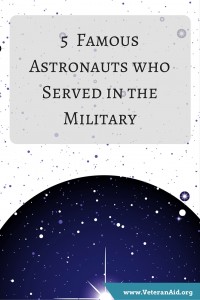 exceptional fit for work in space.

Five of the best-known astronauts who also served in the U.S. military include:

Arguably one of the world’s most famous astronauts, Neil Armstrong was the first person to walk on the moon. However, before the famous Apollo 11 mission, Armstrong served as  command pilot of Gemini 8, becoming NASA's first civilian astronaut to fly in space; during that same flight, Armstrong responded to and averted the first in-flight space by using some of his reentry control fuel to prevent a dangerous spin caused by a stuck thruster. Armstrong flew 78 missions over Korea for more than 121 hours in the air, and he received the Air Medal for 20 combat missions, a Gold Star for the next 20, and the Korean Service Medal and Engagement Star. He passed away in 2012 at the age of 82.

Former USAF Colonel Buzz Aldrin served as the Lunar Module Pilot on Apollo 11, was one of the first two humans to land on the Moon, and was the second person to walk on it (following mission commander Neil Armstrong). He graduated third in his class at West Point and went on to fly jet fighters during the Korean War, completing 66 combat missions in F-86 Sabres and shooting down two Mikoyan-Gurevich MiG-15 aircraft. After the war, Aldrin served as aerial gunnery instructor at Nellis Air Force Base in Nevada, then later, flew F-100 Super Sabres as a flight commander at Bitburg Air Base, West Germany. Before his Apollo 11 flight, he served as pilot on NASA’s Gemini 12, the last Gemini mission where he set a record for extravehicular activity (EVA). Today, Aldrin is a proponent of a manned mission to Mars, with eventual potential colonization.

When the Japanese attack on Pearl Harbor brought the U.S. into World War II, John Glenn quit college to enlist in the U.S. Army Air Corps. However, he was never called to duty, and in March 1942 enlisted as a United States Navy aviation cadet. He later was given the opportunity to transfer to the Marine Corps, where he would fly 149 combat missions and achieve the rank of Colonel. He later served as a test pilot, which put him in the recruiting field for NASA, although he was very close to the cutoff age of 40. February 20, 1962, Glenn became the first American to orbit the Earth, circling the globe three times during a flight lasting almost five hours. This made Glenn the third American in space and the fifth human being in space.

A retired captain in the United States Navy, Lovell was the first of only three people to fly to the Moon twice, and the only one to have flown there twice without making a landing. Lovell was also the first person to fly in space four times and is famous for serving as the commander of the Apollo 13 mission, which suffered a critical failure en route to the Moon but was brought back safely to Earth by the efforts of the crew and mission control. During his time in the Navy, he served at sea, flying F2H Banshee night fighters from 1954 to 1957, after which he entered a six-month test pilot training course from which he graduated first in his class.

Naval aviator and Rear Admiral Alan Shepard Jr. one of the original Mercury Seven astronauts, and in May 1961, became the first American to travel into space.  Ten years later, at age 47, Shepard commanded the Apollo 14 mission during which he became the fifth and oldest person to walk on the Moon, and famously hit two golf balls on the lunar surface. He was promoted to rear admiral on August 25, 1971, the first astronaut to reach that rank. For the Apollo 14 mission, he received the NASA Distinguished Service Medal and the Navy Distinguished Service Medal.