5 Great Military Movies to Watch on the 4th of July

Your Fourth of July weekend may be filled with fun plans for fireworks, barbecue, and friends, all activities that most Americans enjoy when celebrating the independence of our nation. But at the end of a long, hot day, you might enjoy relaxing on your couch and watching some of the most enjoyable military movies that are sure to keep you in the 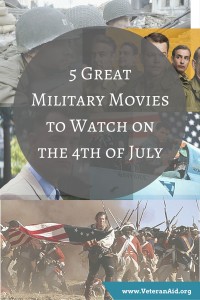 Here are five great movies to watch this Fourth of July weekend:

Seems only appropriate to watch this story of the birth of the United States during Independence Day weekend. While parts of the story are fictionalized, the spirit and bravery of American revolutionary men and women rings true. During the American Revolution in 1776, Benjamin Martin, a veteran of the French and Indian War and a widower with seven children, is called to Charleston to vote on supporting the new Continental Army. Fearing war against Great Britain, Benjamin abstains but the vote is passed and, against his father's wishes, Benjamin's eldest son Gabriel joins the Continental Army. As the War begins, Benjamin is reluctantly but successfully drawn into leadership and the fight for the nation’s freedom, wanting first and foremost to protect his family and home.

Following the dramatic WWII landings at Normandy (depicted quite realistically and graphically in the film’s first 27 minutes), a group of U.S. soldiers are ordered to go behind enemy lines to find the lone surviving son of a woman whose three other sons have died that week in the war. As they travel through the countryside to find Private Ryan, they face situations that question the balance between life and death during war, depict the decisions you must make in battle, and celebrate the loyalty to one’s brothers in arms. A great performance and moving storyline.

Based on real events, an Allied group of men from the “Monuments, Fine Arts, and Archives Program” is given the task of finding and saving pieces of art and other culturally important items before Nazis destroy or steal them during World War II. A seven-man Army unit nicknamed the "Monuments Men” – comprised of museum directors, curators, art historians, and an architect – must guide the Allied units and search for stolen art to return it to its rightful owners. A star-studded cast keeps the dialog both funny and suspenseful, as you see more into an operation that did indeed face danger to preserve cultural items important to all of mankind.

While the story of Forrest Gump does not primarily focus on the military, his time in the service takes the viewer into the midst of the Vietnam War and also follows as he transitions back into civilian life as a veteran, maintaining his friendships with the men with which he served. The story follows several decades in the life of Forrest Gump, a slow-witted but kind-hearted and athletically prodigious man from Alabama who witnesses, and in some cases influences, some of the defining events of the latter half of the 20th century in the United States. He continues treasuring and supporting his elusive love, Jenny, but teaches almost everyone he meets the true meaning of friendship, kindness, and courage.

This iconic movie is full of fighter jet battles, high-octane music, quotable quips, and just overall American swagger.  The film follows Lieutenant Pete "Maverick" Mitchell, a young Naval aviator aboard the aircraft carrier USS Enterprise, and his Radar Intercept Officer (RIO) Nick "Goose" Bradshaw as they are given the chance to train at the Navy's Fighter Weapons School at Miramar in San Diego. The story entails loss and bravery, as the main character goes through training, learning more about himself and his closest friends. The film culminates in a dramatic face-off over the sea as the pilots must face six real-life enemy MiGs.