It was an operation many civilians had never heard about, until the story was made into a blockbuster movie in 2013. But the ill-fated Operation Red Wings conducted in 2005 – known to many now as the inspiration for the movie “Lone Survivor” – was actually a very impactful event, not only because of its acts of bravery but because of its 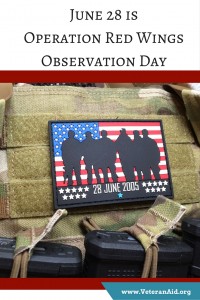 Operation Red Wings was, at the time, the worst single-day U.S. Forces death toll since Operation Enduring Freedom began nearly six years prior, and it was the single largest loss of life for Naval Special Warfare since World War II. During the two-hour firefight on the mountainside of Hindu Kush in Afghanistan, and the subsequent rescue efforts, the death toll included 11 Navy SEALS and 8 Army Night Stalkers, with one lone survivor, Marcus Luttrell.

While the film version of the operation had several differences added in for dramatic effect, the true story of Operation Red Wings still entailed extreme bravery under daunting odds, and stories of personal sacrifice from the U.S. servicemen, as well as help from local villagers who refused to give up the severely injured Luttrell to Taliban loyalists after he struggled the seven miles to their village.

Shah led a guerrilla group known to locals as the “Mountain Tigers” that had aligned with the Taliban and other militant groups close to the Pakistani border. The SEAL mission was compromised when the team was spotted by local nationals, who presumably reported its presence and location to the Taliban.

A fierce firefight erupted between the four SEALs and a much larger enemy force of more than 50 anti-coalition militia members. The enemy had the SEALs outnumbered and also held terrain advantage, launching a well-organized, three-sided attack on the SEALs. The firefight continued relentlessly for two hours, as the overwhelming militia forced the SEAL team deeper into a ravine and down a mountainside.

Lt. Murphy, although already gravely injured, took the heroic action of moving on his own to the open, higher ground to finally make contact with SOF Quick Reaction Force at Bagram Air Base and request help for his men. Taking on heavy, direct enemy fire, he was able to report the size and location of the enemy militia, then return to his men to continue the fight. By his undaunted courage and inspirational devotion to his men in the face of certain death, Lt. Murphy’s act would ultimately lead to the rescue of Luttrell and the recovery of the remains of the three who were killed in the battle.

An MH-47 Chinook helicopter, carrying eight additional SEALs and eight Army Night Stalkers, was sent in as part of an extraction mission to pull out the four embattled SEALs. Although escorted by heavily armored Army attack helicopters, the MH-47 rushed ahead to reach their comrades, receiving a hit from a rocket-propelled grenade that struck the helicopter, devastatingly killing all 16 men aboard.

By the end of the two-hour gunfight on the ground, Murphy, Axelson and Dietz had been killed. An estimated 35 Taliban were also dead. Luttrell had been blasted over a ridge by a rocket-propelled grenade and was knocked unconscious. Regaining consciousness some time later, he managed to slowly crawl down the side of a cliff. Luttrell was severely dehydrated, with a bullet wound to one leg, shrapnel embedded in both legs, and three cracked vertebrae. Gratefully, local nationals came to his aid, carrying him to a nearby village where they kept him for three days. The Taliban came to the village several times demanding that Luttrell be turned over to them but the villagers refused. One of the villagers made his way to a Marine outpost with a note from Luttrell, and U.S. forces launched a massive operation that rescued him from enemy territory on July 2.

Today, 11 years since Operation Red Wings, all Americans should pause to remember the bravery, dedication, and the ultimate sacrifice these Americans made on June 28.