This week marks the 72nd anniversary of the largest amphibious invasion in history, as more than 160,000 Allied troops invaded Western Europe to battle the entrenched German forces during World War II. Operation Overlord, or “D-Day” as it is now known, was a highly secretive operation, under development for more than two years. It proved to be the pivotal moment in WWII, and June 6, 1944 was indelibly marked on the hearts and minds of people across 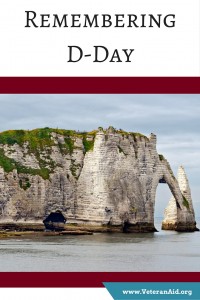 the world, most likely because of the dramatic and iconic landings on five different beaches along a 50-mile stretch of beach in Normandy, France.

Allied forces, about half of them American, approached the turbulent beaches by the thousands in amphibious landing crafts and via airdrop. The Germans, in their heavily protected bunkers and obstacle-laden shoreline, fought back ferociously and incessantly with mortars and machine gun fire, killing many Allied troops before they could even disembark. Many soldiers disembarked into waves that reached over their heads and were peppered with machine gun fire while struggling to the shores (if you want a graphic and brutally honest portrayal of the events at the Omaha landing, watch the unforgettable first 15 minutes of Saving Private Ryan).  As the first wave of survivors struggled up the beaches, looking for cover, then turning their attention to the seemingly impossible task of scaling cliffs and craggy hills to overtake the German bunkers.

Amazingly, the Allied troops prevailed, and with bravery and heroism, pushing the Germans back and beginning to turn the tide of World War II.  Allied causalities on D-Day alone have been estimated at 10,000 killed, wounded, and MIA (6,603 Americans, 2,700 British and 946 Canadians). More than 60 million people, or 3% of the world’s population, were killed during the war, with an estimated 416,800 being military men and women from the United States. It’s understandable that June 6 should remain an important and solemn anniversary.

In a message broadcast to troops before they departed for D-Day operations, Supreme Allied Commander Europe General Dwight D. Eisenhower encouraged, “The tide has turned! The free men of the world are marching together to victory. We will accept nothing less than full victory!” Although thousands sacrificed their lives on this day, 72 years ago, thousands and possibly millions more were saved because of the heroic actions of soldiers from countries across the world.

Today, rows and rows of white crosses and Stars of David mark the shores of Normandy, along with a circular monument inscribed with the names of more than 1,557 Americans who lost their lives in the conflict but could not be located or identified. Across from the entrance, a pink granite slab covers the burial spot of a time capsule containing news reports and artifacts from the 1944 landing, to be opened in the year 2044. Visitors can still see remains of German gun emplacements and bunkers along pointe du Hoc at Omaha Beach.

At the end of the bluff at Utah landing site stands the Ranger Dagger monument, in memorial to the 300 U.S. Army Rangers from the Second Ranger Battalion that were hand-selected to scale the German-occupied, 100-foot cliffs using grappling hooks and ladders borrowed from the London fire departments. Under heavy fire, the Rangers made their way up the cliffs, and soon found and destroyed the German weaponry being used against Allied forces. After fighting two days, only 90 Rangers stood when relieved by Schneider’s Rangers and the 29th Division from Omaha Beach.

Hundreds of stories of heroism and bravery, tragic loss, and, ultimately, victory and liberation should continue to mark this first week in June as we remember the sacrifice of Allied servicemen and women and the end of the Third Reich. Without D-Day, the history of the world would undoubtedly be very different, and generations of people alive today may never have been born. Winston Churchill called D-Day “the most difficult and complicated operation ever to take place," and the British assigned to Sword and Gold Beaches, the Canadians assigned to Juno beach, and the Americans assigned to Utah and Omaha beaches, as well as the airmen and countless support and command members, should always been remembered for their heroic actions more than seven decades ago.