April 23, 2016 marks a very special day for the U.S. Army Reserves (USAR), as it celebrates 108 years since its establishment in 1908. Together, the Army Reserve and the Army National Guard make up the Army element of the Reserve components of the United States Armed Forces. Approximately 200,000 “citizen-soldiers” serve today 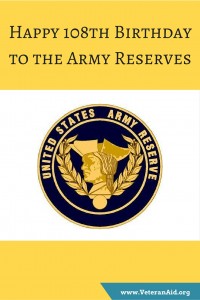 through the Army’s five-year rotational force model around the world.

Authorized by an act of Congress and signed into law by President Theodore Roosevelt on April 23, 1908, the organization was originally called the Medical Reserve Corps and given the duty of standing ready to serve as needed in times of war. 160 medical officers were commissioned, creating the nation’s first federal reserve force.

During the Great Depression, the nation again turned to the reservists, this time enlisting them to serve as commanders and staff officers at the 2,700 Civilian Conservation Corps created by the New Deal. This program helped employ the nation’s young male population  by placing them in barracks and military-style organizations to work in national forests and other outdoor projects.

When World War II began in 1941, one in four Army officers was an Army Reserve Soldier, including more than 100,000 Reserve Officers’ Training Corps graduates.  During the course of the war, the Army would mobilize 26 Army Reserve infantry divisions, and more than 200,000 Army Reserve soldiers would serve in the conflict. After World War II, Congress authorized retirement and drill pay for the first time for ORC members in 1948.

As the threat of global communism began to grow, the U.S. realized that it needed to establish a large peacetime military force for the first time. A more combat-ready Army Reserve became practical and necessary. When the Korean War began in 1950, more than 240,000 Army Reserve soldiers were called to active duty. Later, during the Cold War, the Reserve was mobilized twice.

The United States Army Reserves today continues to be an important force in the operational power of the United States military. Army Reserve soldiers have participated in combat support and service support in the Persian Gulf theater and continue to serve in the Global War on Terrorism.

Happy Birthday to a very important group of soldiers who sacrifice their time and skills to help keep the United States safe and defend freedom around the world.