This year marks the 68th anniversary of the founding of the Air Force Reserve, whose motto – “Fly, Fight and Win” – 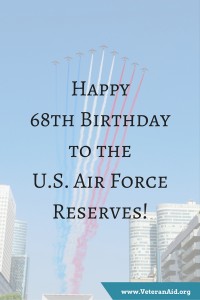 represents the organization’s readiness and history of supporting every global conflict that the Air Force has participated in, whether its airspace, outer space, or cyber space.

Founded by President Harry on April 14, 1948, the Air Force Reserve was originally formed as a “stand-by” force for emergencies. Today, it is a Major Command (MAJCOM) of the Active Duty Air Force, and acts as a critical part of the nation's defense, performing about 20 percent of the work of the Air Force.

Notable former members of the Air Force Reserve include Jackie Cochran, the award-winning pilot and director of the Women’s Airforce Service Pilot Program, and Ronald Reagan, 40th President of the United States. In addition, Jimmy Stewart – after commanding the 703d Bomb Squadron, equipped with B-24s, in WWII – remained active in the Reserve, obtaining the rank of brigadier general in 1959.

The Air Force Reserves recently published an announcement in honor of the 68th year of existence. “Be proud of your innovation, experience and strengths as part of our Total Force team. Innovation is in our DNA and it comes from the diverse experiences you bring to the mission,” the announcement encouraged Reserve members. “Let us continue our proud heritage as innovators, community members, and Citizen Airmen. Thank you for answering the call of duty and contributing to the best air force in the world.”

Watch a special birthday announcement from Commander, Lt Gen James Jackson on the 68th birthday of the Air Force Reserves.