We’ve all seen the heart-warming videos of today’s soldiers returning home, walking through airports where other 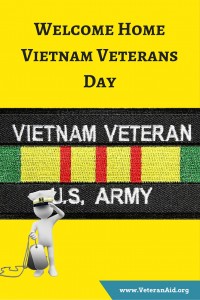 travelers spontaneously erupt into a well-deserved standing ovation. For many soldiers returning from the Vietnam War, however, their experience was, in fact, the very opposite.

Returning to a nation in turmoil, U.S. soldiers returned from the violence and horrors of battle not viewed as heroes but as enemies themselves. Many soldiers even traveled home in civilian clothes to avoid misplaced wrath of anti-war protesters, which could range from verbal assault to even being spat upon. This reaction was often devastating and impossible to ignore.

In 1982, the Vietnam Veterans Memorial in Washington, D.C. was completed, representing a first important step in the healing and long-overdue gratitude deserved by Vietnam veterans. With more than 58,000 names, the architecturally beautiful pair of walls was designed to represent a “wound that is closed and healing.” Nearby, additional statues of “The Three Soldiers” and the Vietnam Women’s Memorial expanded the scope of the memorial, and gave generations a place to come to honor the service of Vietnam vets, and a chance for Vietnam vets to find some late but sincere gratitude.

Still, there was the residual pain left from the lack of a warm welcome home. As these young men and women transitioned back into 1960s, some attended universities on the G.I. Bill and came face to face with students who were vocal and oftentimes lacking in the perspective of what it is to be a member of the military.  Others looked for work with varying degrees of success, while still others suffered silently with what was then the little-known PTSD.

Finally, in 2011 the U.S. Senate took action to resolve the slight that occurred more than 35 years prior. Unanimously passing the resolution, the Senate instituted “Welcome Home Vietnam Veterans Day” on March 30, the date recognized as the final withdrawal date of all combat and combat-support troops from Vietnam.

More than 3,400,000 Americans served in support of the U.S military operations in Vietnam and Southeast Asia, and hopefully, those who are still with us today feel the gratitude and recognition of a grateful nation on this special day. Many of these Vietnam veterans have used their experiences to ensure that today’s soldiers will never go through the same misplaced anger or lack of gratitude upon returning home.

“Our Vietnam veterans are worthy of every praise, monument and memorial erected in their name,” observes the Veterans of Foreign Wars website. “We truly owe them a great debt. It’s because of their strength that the flame of freedom burns brightly today in countries all around the world. And it’s because of their vision for the future that no veteran will ever again return to an America unappreciative of one’s service and sacrifice.”