From Dirt to Digital: The Evolution of U.S. Military Camouflage 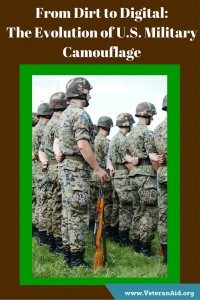 special occasions, you must actually look into a history that ties into the art and strategy of military camouflage.

Today’s military camouflage is an integral and expected part of the battle dress uniforms – or BDUs – for the United States armed forces.  Although it has evolved over time, with new versions released created by computers and other tweaked to meet the landscape of current theaters of war, the concept has always remained the same. Blend in to increase your chances of success and survival.

Surprisingly, camouflage is a relatively young concept for the U.S. Army, who first unofficially embraced the idea during the Spanish-American War, as U.S. soldiers smeared mud all over their blue coats to become less visible to Cuban snipers. In 1902, the Army took a cue from British troops stationed in India, and officially changed the summer uniform to a brown khaki color and the winter uniform to olive-drab, reserving the pervious blue coat for special occasions. Hence, “Dress Blues.”

When WWI began, troops were suddenly facing new technology that made them much more visible and easier to target, including aerial photography and machine guns. The government suddenly started taking the concept of blending in – or as it was known in French, “camoufler” meaning "to disguise” – much more seriously, even going so far as to create a unit made up of camofleurs who were artists, sculptors, designers, and even ad men in their civilian lives.

During the WWII era, camouflage continued to be useful, especially conceptually when concealing airports, oil tankers, and factories with netting, foliage and smoke. Camouflage BDUs however, rose and fell in popularity, as officials experimented with various fabrics and patterns. The Marines released a reversible beach/jungle coverall with green-and-brown "frog" patterns, and later added a two-piece uniform, helmet covers, ponchos and shelters. However, the sides of the material often washed out to a pink color, and the reversible materials were uneven and hot.

Similarly, during Vietnam, the solid olive-green "boonie suit" was preferred over the four-color pattern released by the U.S. Army Engineer Research and Development Laboratory (ERDL), although the leaf-and-twig pattern helmet and shelters issued in the 1950's were still very popular. An unofficial pattern very popular during Vietnam, however, (especially with Navy SEALs, Green Berets, and other Special Forces) was the Tigerstripe pattern, featuring black horizontal stripes over a dark-and-light-green background.

With the involvement of engineers and even neuroscientists and behavioral scientists, camouflage became less artistic design and more calculated science. Using "clutter metrics" — or measurements in how the eye locates and detects objects — more complex camouflage designs were created. In the 1970s, the M81 woodland pattern became the new standard U.S. camouflage and was authorized for all branches of the military. Specifically designed to help military members blend in with the European environment of the Cold War, this approach signaled the practicality of tweaking camouflaged based on the specific geography of the arena of war. To adapt to the landscape of the Gulf War, soldiers wore a 6-colored pattern nicknamed "chocolate chip" or "cookie dough," featuring dark brown and gray, black specks, later replaced by a more subdued, three-color version.

Around 10 years later, the Marine Corps released its pixelated MARPAT (MARine PATtern) uniform, featuring small, square blocks of color. A few years later, the Army introduced a computer-generated Universal Camouflage Patter, a three-color mix of green, tan and gray that helps soldiers blend into woodland, desert, and urban environments. In 2010, the Army continued to tweak its camouflage, introducing MultiCam for all Afghanistan operations, and in 2015, rolling out the branch-wide Operational Camouflage Pattern, accompanied by eight design tweaks to the uniform itself, a new boot, and darker belt.

The future of camouflage truly knows very few limits. Today, entire bridges can be covered with high-tech adhesive photographs, and temporary camouflage can be painted on then washed off military tanks. There’s even a type of fabric that prevents infrared radar from detecting body heat. Camouflage has come a long way from soldiers rubbing mud on their bright blue uniforms, and U.S. servicemen and women have surely benefitted from the increased security and stealth.

3 Responses to “From Dirt to Digital: The Evolution of U.S. Military Camouflage”