The Department of Veterans Affairs' (VA) National Cemetery Administration maintains 135 national cemeteries in 40 states (and Puerto Rico) as well as 33 soldier's lots and monument sites. These sites range from very small – less than a half acre in size – to more than a 1,000 acres. Regardless of the size, these serene locations offer a chance for veterans and civilians to pay their respect, reflect, and honor those who gave the ultimate sacrifice.

Below are the 10 largest national veterans cemeteries in the United States.

Not only is Calverton National Cemetery the largest of any national cemetery in the U.S., it is also one of the busiest, conducting more than 7,000 burials each year. Constructed in 1978, it became the third national cemetery located on Long 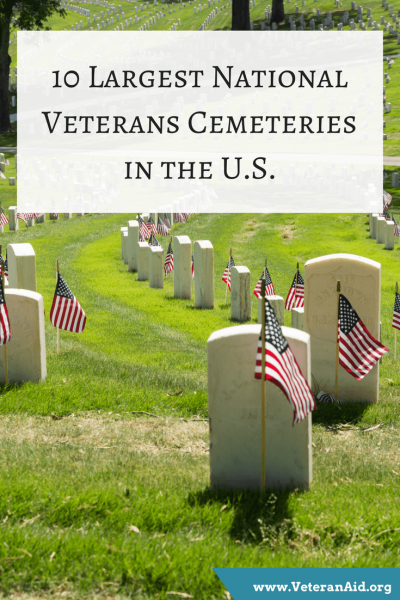 Island, after the existing cemeteries were reaching capacity and the state needed a new regional cemetery to serve the greater New York area, home then to nearly three million veterans and their dependents. The site was originally designed with an innovative “wheel” of committal shelters, radiating out from a center location, so that multiple burial services could be held simultaneously. Today, the walls of these shelters have been converted into a columbaria for the inurnment of cremated remains. The cemetery also features a memorial pathway lined memorials that honor America’s veterans, most commemorating soldiers of 20th century wars.

Located about 50 miles southwest of Chicago, this cemetery was dedicated in 1999 and became the 117th national cemetery within the Department of Veterans Affairs National Cemetery Administration. When fully developed, it will provide 400,000 burial spaces. The cemetery is named after President Abraham Lincoln, the 16th President of the United States and founder of the National Cemetery system, who worked and lived in Illinois. A life-sized bronze statue of Lincoln stands in the cemetery, along with a Blue Star Memorial Marker, and an 18-foot granite obelisk topped by a bronze eagle commemorating the 2,403 Americans who died in Pearl Harbor on Dec. 7, 1941.

Since the year 2000, this cemetery has been the most active cemetery in the National Cemetery system, based on the number of interments. Established in 1976, its rolling landscape features a central boulevard with memorial circles, lakes, indigenous-styled committal shelters, and a memorial amphitheater. It is home to the Medal of Honor Memorial – whose walls feature the names of all Medal recipients. The cemetery is the final resting place of five Medal of Honor recipients, a Distinguished Cross recipient, and several members of the legendary Tuskegee Airmen, America’s first aviators of African descent. Numerous dramatic and beautiful memorial sculptures grace the cemetery, including the POW Memorial bronze statue which depicts an American serviceman on his knees with hands bound by his captors, surrounded by black marble pillars that evoke imprisonment.

Located in Cherokee County, this cemetery was opened in 2006 and has been undergoing development with the intention of servicing the interment needs of U.S. military veterans and their families for the next 50 years. Offering views of the Blue Ridge Mountains and Lake Allatoona, it includes a total of 33,000 full-casket gravesites, 3,000 in-ground sites for cremation remains, and 3,000 columbaria niches for cremation remains. The property on which the cemetery rests was donated by Scott Hudgens, the late Atlanta World War II veteran, land developer and philanthropist.

Fort Custer was named after General George Armstrong Custer, a native of the state of Michigan. The establishment of Fort Custer Post Cemetery took place on Sept. 18, 1943, with the first interment; the site became officially the Fort Custer National Cemetery in September 1981 with its first burial under the new classification taking place on June 1, 1982. Today the cemetery is the final resting place to more than 30,000 veterans. The cemetery features a memorial pathway lined with more than 30 memorials that honor America’s veterans, donated by various organizations, and an impressive Avenue of Flags composed of 152 flagpoles located along the main road, and an additional 50 flagpoles arranged in a semi-circle at the head of the thoroughfare.

Located 65 miles southeast of Boston and adjacent to the Otis Air Force Base, this land became the first parcel acquired by the National Cemetery System for the specific purpose of building a new national cemetery since 1949. When it was dedicated on October 11, 1980, it became the third new national cemetery to open in nearly 30 years (after Calverton, New York, and Riverside, California, were the first and second, respectively). More than 46,000 interments have taken place here, including two Medal of Honor recipients, and one burial of an Unknown Soldier from the Massachusetts Volunteer Infantry whose body was unearthed during a highway excavation in South Carolina in the 1980s. The cemetery also is home to a memorial trail featuring 47 memorials and a carillon erected in memory of veterans from World War I to the modern era.

Quantico National Cemetery is located on land that has been used by the military for over 200 years: first, around 1775 by the Commonwealth of Virginia for Navy operations, and later, as a blockade point for the Confederate army during the Civil War. In 1918 a permanent Marine base was established at Quantico, and the Marine Corps donated land for the cemetery in 1977; the cemetery was formally dedicated in 1983. The cemetery is home to nine memorials, including those honoring Edson’s Raiders, Purple Heart recipients, well-known Marines, and Virginia veterans.

Indiantown Gap derives its name from the various Native American communities that resided in this region of Pennsylvania; the first inhabitants were Susquehannocks, an Iroquois tribe. In the 1930s, it became a training area for the U.S. Army and control of the facility was turned over to the Pennsylvania National Guard in 1998. In 1976, a section of Fort Indiantown Gap Military Reservation was selected as the national cemetery for the states of Delaware, Maryland, New Jersey, Virginia, and West Virginia. Today it is the final resting place for more than 44,000 veterans. The cemetery’s elaborate Pennsylvania Veterans’ Memorial is the largest monument in VA’s National cemeteries. The combination open-air space and building stands 107 feet high and 360 feet long, and recreates the feeling of a war-torn building in a land of solemnity.

Dallas-Fort Worth National Cemetery is the sixth national cemetery in Texas and the 118th in the national cemetery system. Currently, more than 1.5 million veterans live in the state of Texas and approximately 460,000 reside in the cemetery's service area. When fully developed, the cemetery will serve as a final resting place for more than 280,000 eligible veterans and dependents. The cemetery features a memorial walkway lined with more than 50 memorials that honor America’s veterans, donated by various organizations, most commemorating events and troops of the 20th century wars.

5 Responses to “10 Largest National Veterans Cemeteries in the U.S.”