20th Anniversary of the Women in Military Service for America Memorial

Posted in Uncategorized on November 7, 2017

Standing at the ceremonial entrance of Arlington National Cemetery is the only major national memorial to honor the more than 2.5 million servicewomen who have served or are serving with the U.S. Armed Forces. The Women in Military Service for America Memorial – which includes an education center, a Hall of Honor, and an interactive database with photos and stories of servicewomen – recently celebrated the 20th anniversary of its dedication, which took place on October 18, 1997, to crowds of thousands of female veterans, service members and top-level politicians. 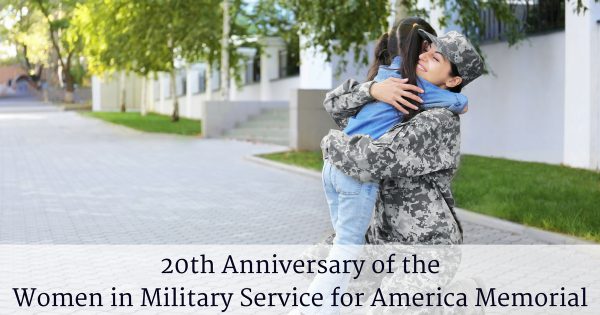 Many of the attendees at this year’s event were present at the Memorial’s original dedication two decades ago – including keynote speaker, retired U.S. Air Force Gen. Janet C. Wolfenbarger, Defense Advisory Committee on Women in Services chair – and female veterans who served as far back as WWII.

Many took the opportunity to reflect not only on their own experiences in the military, but to celebrate the many “firsts” that have occurred over the last 20 years, including the first female Army Rangers and the first female Marine infantry officer.

In conjunction with the celebration, the Memorial also released a retrospective video on its Facebook page, featuring scenes from the original dedication and interviews from some of the thousands in attendance.

The 33,000 square-foot Memorial today draws approximately 200,000 visitors a year, with the heart of its exhibit being its official “register” or database that includes facts, photos and stories from female service members.

Though millions of women have served in the Armed Forces since the Revolutionary War, the database currently only contains information on around 269,000 women. An ongoing effort to publicize the database and encourage women to register is a main outreach effort for the Memorial; women can register themselves on the Memorial's website, or family members can register a female veteran as well.

The Memorial also recently released a 360 degree interactive view of the site, which is housed in the repurposed Hemicycle structure of the original ceremonial entrance to Arlington National Cemetery. It includes an impressive skylight, an upper-terrace overlook of cemetery, etched glass panels with quotations from and about servicewomen, and an education center with a gallery and theater. The total cost of building the Memorial was $22 million, supported by federal grants, proceeds from corporate, individual and organizational donations and the sale of commemorative silver dollars. Today the Memorial Foundation actively maintains the education center and other activities related to operations.

The Memorial is open from 8 a.m. to 5 p.m., every day except for Christmas Day. Groups can call (703) 892-2606 at least two weeks out to arrange for a docent to give a personal tour of the Memorial encompassing the Exhibit Gallery, Hall of Honor, Register Room and Upper Terrace. You can also donate online through the Memorial’s webpage.