More debate and discussion is on the horizon regarding the U.S. Department of Veterans Affairs (VA) Veterans Choice Program (VCP), after a $2.1 billion emergency spending bill signed into law by President Trump earlier this year is expected to run out of funds by the end of 2017. 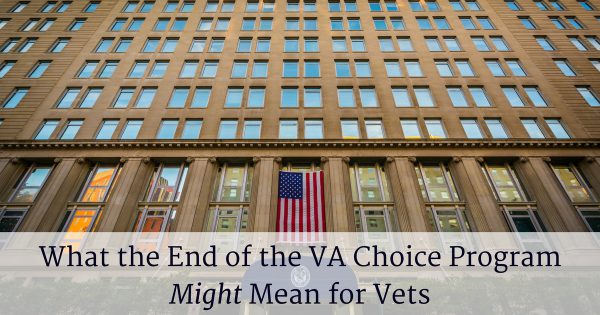 The emergency funds were originally estimated to keep the program operational until February 2018, but are being used up more quickly than expected due to reported budgeting mistakes and higher-than-expected program use.

How the End of the VA Choice Program Could Impact Veterans

Instituted in 2014, the VCP was established after a nationally publicized scandal broke in Phoenix, when a group of more than 12,000 VA patients were left waiting for months for appointments, leading to some passing away while waiting. It was later discovered that many of their records were altered to hide the length of the wait-times, and, during the subsequent investigation, numerous other VA clinics across the nation were found to be practicing similar falsified reporting measures.

As a result, President Obama signed the “Veterans Access, Choice, and Accountability Act“ (VACAA), which introduced the VCP, allowing currently enrolled veterans to use their VA benefits to see a private health care provider in their own community, if they passed the “30-day/40-mile” rule:

By mid 2017, more than 30% of VA appointments were taking place in the private sector – a 10% increase since its creation in 2014 – triggering worries that funds were being used faster than expected. When VA leadership started raising the red flag that the VCP – without legislative action – would run out of funding by mid-August 2017, the resulting emergency bill not only gave an extension to the life of the program, but also authorized new leases for additional VA medical facilities and established measures to help fill the agency’s 34,000+ reported job vacancies.

Unfortunately, the additional funding now appears to be falling short, with a new default date estimated for December 2017, potentially leaving thousands of veterans waiting for care.

The House Committee on Veterans’ Affairs is expected to include various proposals for overhauling the VCP this month, from both the VA and the House Committee itself, in hopes of making progress in establishing a new system before the Thanksgiving break. The VA proposal – titled the “Veterans Coordinated Access and Rewarding Experiences Act,” or CARE, and circulating in anticipation of the hearing – is aimed at doing away with the 30-day/40-mile rule. Instead a veteran could see a private provider if the VA can’t schedule an appointment within a “clinically acceptable time period,” or if a veteran and his or her physician believe it’s the best course of action.

Additionally, the CARE proposal would consolidate the multiple VA community care programs, allow veterans to use to walk-in clinics for minor illnesses and injuries, and institute business management improvements to address problems in budgeting and financial management.

In any case, the timeline on improving the relationship between the VA and the private sector is on an accelerated track, as the VA, veterans organizations and representatives work to prevent a return to long wait times and detrimental experiences for the nation’s veterans and their dependents.