As the overall U.S. population ages and Baby Boomers advance to their mid-60s, the number of Americans with Alzheimer’s disease and related dementias continues its upward rise, impacting an expected 14 million by 2050. This degenerative brain disease currently affects more than 5.2 million Americans over the age of 65 – or 1 in 10 seniors – slowly destroying memory, reducing the ability to care for oneself, and ultimately, causing death. It is currently the third leading cause of death of seniors in the U.S. after cancer and heart disease. 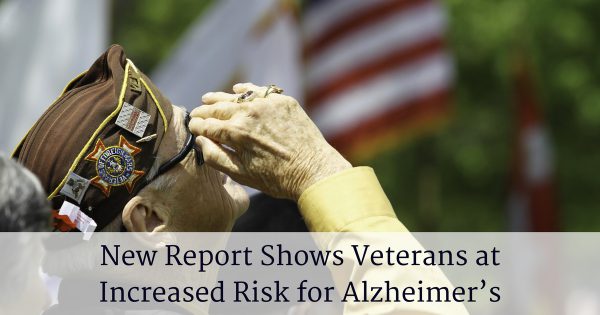 Alzheimer’s has no cure or preventative measures, and alarmingly, the most recent studies suggest veterans are at an increased risk for Alzheimer's compared to their civilian counterparts. In fact, statistics show that veterans are more than twice as likely to develop the disease when compared to seniors who have never served. These statistics are corroborated by enrollment numbers from the U.S. Department of Veterans Affairs (VA), who saw an increase of 166% of veterans with Alzheimer’s over the last decade.

Why Veterans Are at an Increased Risk for Alzheimer's

A recent report published by the advocacy group, Veterans Against Alzheimer’s, outlines the top findings and statistics on the increased risk to veterans, in an effort to educate and encourage more research and services in preparation for the future impact of the disease.

Included in the brief are the unique factors that seem to increase a veteran's risk for Alzheimer’s, including:

Senior veterans who have experienced blast-induced neurotrauma (BINT), traumatic brain injuries (TBIs) or successive concussion syndrome, show a marked increase in the risk of developing Alzheimer’s. For example, seniors with a TBI have a 60% greater chance of developing the disease, with onset occurring an average of two years earlier than those who have not. Sadly, the rate of these types of brain injuries is on the rise for younger veterans (22% of all combat wounds from Afghanistan and Iraq are brain injuries, double the rate of the Vietnam War), suggesting that the number of future veterans at higher risk will be even greater in the years to come.

While the relationship is not completely understood, there is a marked increase in Alzheimer’s in veterans who have been diagnosed with depression or Post-Traumatic Stress Disorder (PTSD). In fact, these veterans are more than twice as likely to develop the disease. These statistics are particularly alarming for Vietnam-era veterans, as the VA estimates that 30% of Vietnam vets have suffered from PTSD during their lifetime, four times the rate of the general U.S. population.

Alzheimer's and dementia are associated with aging and the surge in older veterans is expected to increase the overall number of veterans at risk for Alzheimer's. In fact, 49% of U.S. veterans are now age 65 or older, compared to just 15% of the general population. The VA estimates that more than 750,000 older veterans have dementia; other statistics estimate that an additional 420,000 veterans will develop new cases of the disease between 2010 and 2020.

Advocacy groups are scrambling to sound the alarm of the approaching epidemic, noting several obstacles to care are faced by senior veterans at risk for Alzheimer’s. For example, many senior veterans report not understanding how to utilize their VA benefits or navigate the claims system. Many are unaware of special VA pensions – like the Aid and Attendance Benefit – that can help ease the financial burden of professional continuing care.

Additionally, the backlog and long wait time to see a provider – sometimes stretching up to a month – reduces the likelihood of veterans being diagnosed in a timely manner. Sadly, there remains a perceived stigma among veterans related to brain-related diseases or mental health issues, reducing their likelihood of seeking out and receiving effective care.

The lack of care and preparedness has a very real impact on veterans at risk for Alzheimer's and the rest of society as well. Alzheimer’s is the most expensive disease in North America, with the direct costs of caring for those with Alzheimer’s and other dementias in 2017 reaching $259 billion.

The disease is particularly difficult on family caregivers, who carry more of the emotional and financial strain as the disease progresses over years. Reports show that a significant number of family caregivers caring for dementia patients suffer their own personal negative effects, including depression and social isolation.

Alzheimer’s disease will continue to be a major problem for the aging U.S. population for the foreseeable future, but these new statistics prove that it must be a top concern for the VA and all medical providers working with senior veterans.