What the VA is Doing About the Opioid Epidemic

Posted in Uncategorized on December 28, 2017

In October 2017, President Trump officially declared the United States’ opioid crisis a “public health emergency,” a proclamation that allows for more funds to be dedicated to combating opioid abuse, hiring specialists to focus on the crisis, expanding telemedicine services for rural areas and increasing training for federally employed prescribers of painkillers. 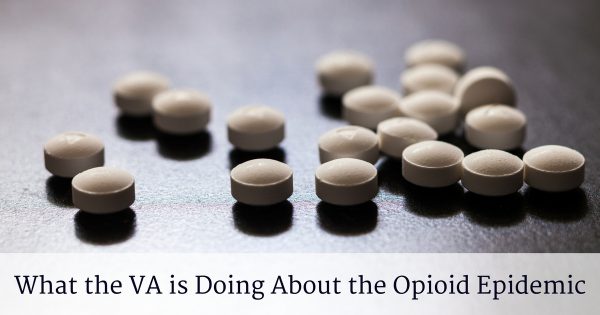 Trump also referenced an intensified effort to block shipments of fentanyl – a cheap and potent synthetic opioid – from China into the U.S. While overall nationwide drug death statistics show that more than 64,000 people died from drug overdoses in 2016 – including a 540% increase in Fentanyl deaths in the last three years – U.S. veterans seem to be particularly at risk and embroiled in the opioid epidemic.

Preliminary research suggests a connection between a disproportionately high rate of chronic pain sufferers among veterans – more than 50% of all veterans receiving Department of Veterans Affairs (VA) health care are affected by chronic pain – and much higher rates of “co-morbidities” such as depression, post-traumatic stress disorder (PTSD), traumatic brain injury and socioeconomic issues such as disability and joblessness.

These added dynamics, the VA is now recognizing, seem to cause “challenges” when trying to treat chronic pain with prescription opioids.

According to the National Institute of Drug Abuse, opioids are a class of drugs that interact with opioid receptors on nerve cells in the body and brain. Opioids include pain relievers available legally by prescription, such as codeine, hydrocodone, morphine, oxycodone and many others. Opioid pain relievers are generally safe when taken for a short time and as prescribed by a doctor, but because they produce euphoria in addition to pain relief, they can be easily misused, leading to dependence and overdose incidents. People who become dependent on legal opioids may eventually turn to illegal opioids such as heroin and Fentanyl.

Over the past decade, prescriptions for four opioids (hydrocodone, methadone, morphine and oxycodone) surged by 270% according to the Center for Investigative Reporting, leading to addictions and a fatal overdose rate that was twice the national average. During roughly this same timeframe, the number of veterans addicted to opioids rose 55% to a total of roughly 68,000, or about 13% of all veterans prescribed opioids.

According to the VA‘s own research and statistics, veterans were 10 times more likely than the average American to abuse opioids, and this abuse was a leading cause of homelessness among veterans.

Veterans were also twice as likely to die from accidental overdose compared to the non‑veteran population, with risk factors including:

What the VA is Doing About the Opioid Epidemic

This alarming rise in addiction rates caused the VA to react by establishing a national office to improve pain management practices as well as new standardized metrics for tracking opioid use. Still, in 2012, nearly 25% of veterans receiving outpatient care in the VA were prescribed an opioid. In 2013, the VA launched the Opioid Safety Initiative (OSI) that, over about four years, reduced opioid prescriptions by approximately 25% and reduced the number of patients receiving daily opioid/benzodiazepines combinations by 47%.

However, this effort unintentionally left a gap in care for certain veterans, as detailed by an article in Psychology Today. While some could keep their prescriptions, they now were required to make monthly appointments for refills through an already bottlenecked system. Others were cut-off “cold turkey” with few effective alternatives to the opioids, other than cognitive therapy that did not seem to be very effective in handling chronic pain. Many veterans faced the despair of withdraws while others found they could no longer function in their normal life because the pain was too great without the opioids.

Today the VA is working to address the opioid epidemic on four levels, addressing the alarming rate of addiction and prescriptions while balancing the realistic needs of veterans in chronic pain. The four-pronged approach includes:

The VA offers a number of options for those seeking treatment for substance use problems, including therapy – either alone with the therapist or in a group – as well as medications to help veterans reduce their use of alcohol and drugs. There are three different medications currently in use for treating addiction to opioid drugs: Methadone is an effective approach for chronic opioid addiction that can be provided only within a special program, while Buprenorphine/naloxone, and naltrexone can be part of treatment plans in a variety of clinical settings. Residential options are available for veterans who live far away from a VA clinic or have unstable housing.

This includes informed consent requirement for patients prescribed chronic opioid therapy as well as an extensive training and “academic detailing” plan for VA prescribers given by pharmacists with dashboards and data to encourage safer use of opioids. The VA has also developed an overdose education system for patients and providers, including thousands of naloxone doses that can be life-saving in the case of an accidental overdose.

Looking for alternative ways to manage chronic pain is imperative in helping veterans reduce dependence on opioids. This initiative focuses on interdisciplinary teamwork and more education on complementary and integrative medicine options, such as acupuncture and topical gels. The VA also put effort into expanding mini-residency programs and more telemedicine consultations for patients in remote areas with less access to primary care.

A new database system tracks four indicators of opioid safety at multiple levels (clinician, facility and system-level) then serves up the results for clinicians and facility managers through an online dashboard. The data is also augmented with high-tech predictive modeling to estimate the risk of overdose or suicide-related events for each VA patient on opioids, updating results on a daily basis to highlight patient-specific risk factors that should be addressed.

For more information on the VA’s opioid education resources, including an in-depth section on Veteran/Patient Education, visit the VHA Pain Management Page.