For today’s veteran population, there is increasing public awareness of service-related injuries and disabilities, both for those with outward impairments – such as loss of a limb or need for a wheelchair – as well as those that are less visible – like post traumatic stress disorder (PTSD) and traumatic brain injury (TBI). However, one of the most common service-related injuries and subsequent disabilities is actually completely invisible: noise-induced hearing loss.

In fact, recent studies show that the two most prevalent service-connected disabilities for veterans in the U.S. remain tinnitus (a ringing, buzzing, or other type of noise originating in the head) and hearing los. Tinnitus affects almost 10% of veterans, and hearing loss affects almost 6%. According to the U.S. Department of Veterans Affairs (VA), at the end of 2014, more than 933,000 veterans were receiving disability compensation for hearing loss, and nearly 1.3 million received compensation for tinnitus. In addition, many veterans who scored normally on hearing tests had difficulty understanding speech, a condition 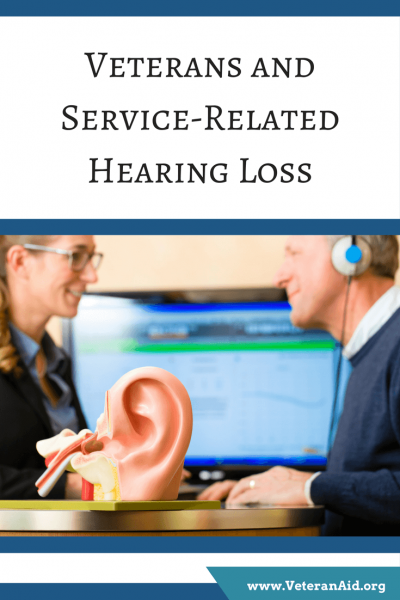 These statistics are perhaps not surprising since almost every servicemember in every branch is at sometime, during training or combat, exposed to noise that surpasses acceptable levels for even double-insulated hearing protective gear (ear plus combined with insulated ear muffs).

Sadly, these injuries can be particularly detrimental to members of the Armed Forces, who depend heavily on an acute sense of hearing to receive orders, communicate effectively, and pick up auditory cues from both allies and enemies. Additionally, hearing protection devices – while shown to be statistically out-rated during many service situations – can also be perceived to a hindrance to communication during specific combat settings, leading to a potential lack of safety gear compliance and an increased exposure to noise injuries.

Interestingly, formal hearing protection devices were first introduced by the Air Force in 1948; before that, historic evidence shows that soldiers used either cotton, their fingers, or – near the end of WWII – early versions of insulated earmuffs. In the 1960s, the hearing protection devices improved with triple-flange earplugs and higher-quality earmuffs. In the 1970s, the first noise attenuation helmets were introduced, then no major changes took place until the 1990s, when protection devices remained the same but new inset earphones in tank and helicopter helmets were made available. In the 2000s, with the War of Terrorism, the first “Combat Arms Earplugs” were introduced, offering higher-tech, responsive protection to noise in combat.

For the hundred of thousands of veterans suffering with hearing loss or tinnitus, there are some treatment options that seem to be helpful. Conductive hearing loss, resulting from damage to the eardrum and middle ear structures, can often be reversed through surgery or medication. Sensorineural hearing loss, caused by damage to the inner ear and auditory nerve, is permanent, but can often be helped through the use of hearing aids. Unfortunately, only about 1 in 5 people who would benefit from hearing aids actually use them, according to the National Institute on Deafness and Other Communication Disorders.

According to the website NOLA (an online database of legal information), to be deemed “service-connected,” hearing problems must be diagnosed by a licensed audiologist and must include both a Maryland CNC test and a puretone audiometric test; be sure to tell your audiologist that you must have both tests in order to satisfy the VA's requirements for service connection (and remember to remove any hearing aids you may have before being tested). If you don't suffer hearing loss until many years after leaving the service, you may still be eligible if you can show that you were exposed to loud noise during service.

It is VA policy that all veterans enrolled in VA health care are eligible for medical services that include diagnostic audiology, and many veterans are also eligible to receive hearing aids from VA. Contact your local Veteran Service Officer or Service Organization to learn about the best steps to access benefits for hearing loss, or talk to your VA medical provider.

One Response to “Veterans and Service-Related Hearing Loss”