Posted in Uncategorized on January 9, 2018

As employers commit to hiring veterans, the unemployment rate for those who served is the lowest it has been since September 2001. 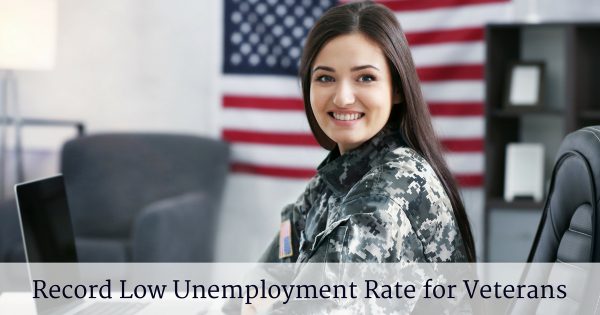 Learn more about the companies that are prioritizing hiring veterans and why.

“Veterans are loyal, resilient, posses a strong work ethic and are masters of teamwork. Companies, especially the nominees and winners on our list, know that veterans bring advanced experience in meeting mission objectives and will adapt those skills into their jobs.”

Job hunting website Monster.com worked with a panel of veteran hiring experts and Military.com to create a list comprised of the 10 best companies for veterans. Each of these companies employs at least 15% of veterans in their workforce.

Headquartered in Chicago, Boeing’s workforce is 15% veterans and in 2017, 15% of their total hires were veterans. Their veteran hire retention rate in 2016 was 92% and their Boeing Military & Veteran Engagement Team (BMVET) strives to combine Boeing’s company efforts with military and veteran communities.

BAE Systems (BAE) is an international defense, aerospace and security company headquartered in Arlington, Virginia. They have a goal to hire 100 veterans in 2018, emphasizing hiring female veterans. They have a Warrior Integration Program that helps combat-wounded veterans enter the workforce and the CEO of BAE personally recognizes 5,000 veteran employees annually for their contributions to the company. 16.5% of BAE’s employees are veterans.

USAA is an insurance, banking and investment company that serves more than 11 million members who are active duty military or honorably discharged from the military, and their families. The company has a goal for 30% of all hires in 2018 to be veterans or military spouses. The company also offers a 12-month veteran transition program. 15% of the company’s workforce are veterans and 22% of 2017 hires were veterans.

Headquartered in Green Bay, Wisconsin, Schneider National provides trucking and transportation logistics services. Ranked the best company for veterans in 2016, over 25% of the company’s workforce is veterans. The company accepts driving certifications through the Military Skills Test Waiver.

Lockheed Martin is a global aerospace, defense, and security contractor in Bethesda, Maryland. The company has a full-time military relations and recruiting team that attends over 170 military recruiting events annually. The company also hosts an Military/Veterans Leadership forum each year to seek solutions for better supporting military veterans in their careers. 23% of the company are veterans.

One of the world’s largest law enforcement agencies, U.S. Customs and Border Protection keeps terrorists and their weapons out of the United States and enforces lawful international trade and travel. 29% of the agency are veterans.

Headquartered in Reston, Virginia, Intelligent Waves is a veteran-owned small business that provides IT and communications support to U.S. government customers. They offer an Employee Assistance Program that provides referral and counseling to veterans. 47% of the company are veterans.

A whopping 64% of of ManTech International’s 2017 hires were veterans and 46% of the company are veterans. ManTech provides technological services to the U.S. government and plans and is headquartered in Fairfax, Virginia. The company plans to further increase veteran hires in 2018.

What companies would you put on this list? Why do you think hiring a veteran is beneficial to corporations? Share your thoughts and experiences with us in the comments below.