PTSD in Men vs. Women: What We Are Learning

Posted in Uncategorized on December 7, 2017

While Post Traumatic Stress Disorder (PTSD) is commonly associated with male combat veterans, more research is being conducted to understand why women overall are twice as likely to develop PTSD than men. 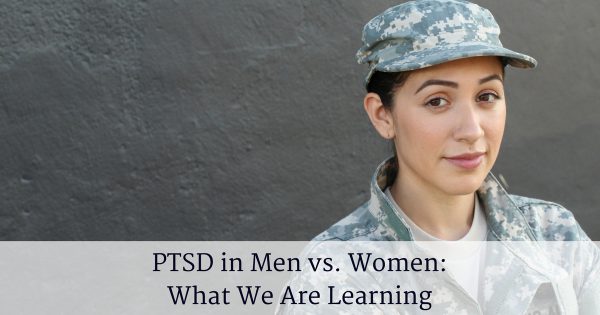 Early research on the topic primarily focused on studies of Vietnam veterans, but emerging information is now proving that more understanding is needed on today’s veterans and the differences between the genders.

Currently, the rate of returning veterans seeking PTSD treatment from the Department of Veterans Affairs (VA) is basically the same between male and female veterans.

However, preliminary research is suggesting that women not only respond more strongly to the potential of repeated trauma – and experience certain PTSD symptoms more frequently than men – but that they may respond to various therapies more efficiently than their male counterparts.

These findings, and the many questions they have subsequently raised, are continuing to drive the VA’s research in understanding PTSD and its treatment for both veterans.

Recent statistics from the National Center for PTSD show that, in the general population, more than 50% of women will experience trauma in their lives, a rate that is actually slightly lower than a man’s risk of exposure to trauma over his lifetime. The leading causes of trauma to women include:

Among today’s female service members, however, the chances of being exposed to trauma through combat is actually increasing, as all roles are now open to both genders. Women in the military are still more likely to be exposed to sexual harassment or sexual assault than their male counterparts, and according to the National Center for PTSD, sexual trauma is actually more likely to cause PTSD than many other events.

PTSD in Men vs. Women

Preliminary theories on why women are more likely to develop PTSD than men, include the likelihood that the event involves sexual abuse and that women tend to be more likely to blame themselves for their trauma. Within the subset of women, certain elements also increase a woman’s likelihood of developing PTSD, including being injured during the event, having past anxiety issues, not having good social support, having a severe reaction at the time of the trauma or experiencing other stressful events after the trauma.

After a traumatic event, men and women tend to respond differently and exhibit certain PTSD symptoms more commonly than others:

In order to understand more of the differences between how men and women process traumatic events, researchers at the San Francisco VA Medical Center recently conducted a series of tests examining 18 men and 13 women who had been previously diagnosed with PTSD. The study involved showing the participants certain images on a screen; some of the images were accompanied by a mild shock each time they were shown. Electrodes on the participants hands helped track their response to the images as the testing went on (pulse rate, sweaty palms, etc.), and showed how the subject was anticipating the shock they learned would be associated with certain images.

Interestingly, the female participants in the study had stronger anticipatory responses to the visual cues than did the male participants – a term the researchers coined “fear conditioning.” This seemed to suggest that females that have experienced a traumatic event might retain that fear conditioning and its PTSD symptoms – avoidance, hyperarousal, numbing, reexperiencing – more strongly, even after returning home to a safe environment.

However, the results also raised additional questions, such as: could women similarly respond more strongly to “fear extinction” therapies? How do biological differences, hormones and neuropeptides affect these results? Would there be similar results on test subjects who were not already diagnosed with PTSD?

Despite these gains in understanding into the differences between males and females and how they are affected by PTSD, the VA recognizes that more study is needed on the topic. There are preliminary suggestions that females do respond better to specific types of PTSD therapies because they are more open to sharing their feelings with others than their male counterparts. Other research also suggests that women may be more likely to seek help after a traumatic event than their male counterparts, suggesting different tools might be necessary to reach out to military members based on their gender.

For more information on the ongoing efforts, or to access help for PTSD symptoms, visit the National Center of PTSD’s website.