Posted in Uncategorized on December 19, 2017

Necessity is the mother of invention, as the saying goes, and extreme times – like those brought on by war – can yield great innovations from the minds of America’s most forward-thinking inventors. Government rations, limited supplies and the need to improve over the enemy has always driven civilians, researchers and scientists to think outside of the box to find better, more efficient ways of supporting the Armed Forces. 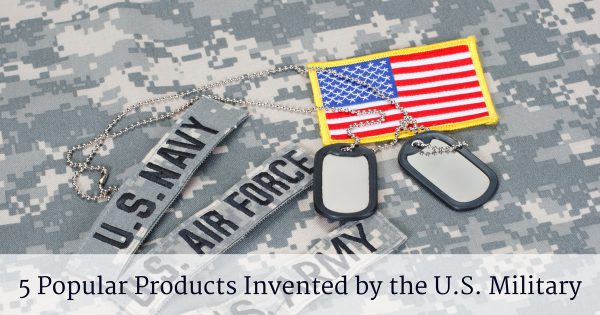 The World War II era was especially full of great innovations that have reached beyond their original military purposes to become common in the American household.

Below are five of the most popular products that you may not know actually resulted from military efforts:

As soldiers stationed in the South Pacific during World War II battled the enemy, they also had to fight again malaria-carrying insects and mosquitos. In a partnership with the Department of Defense, two scientists with the United States Department of developed a way to deliver insecticide as a fine mist, nicknamed a “bug bomb” by the soldiers.

The first aerosol can of the spray was patented in 1941 and later refined into a cheaper plastic aerosol valve meant for commercial mass production by another inventor eight years later. Today’s aerosol cans are significantly less damaging to the environment but can still offer production against a wide range of insect-borne diseases.

Although you may refer to it today as “duct tape,” the original name of this revolutionary adhesive tape was indeed, “duck tape.” The water-resistant tape was designed to be torn by hand rather than scissors, but that was also durable and water-resistant, thanks to its unique cloth backing. During World War II, an ordinance factory worker named Vesta Stoudt – who was also the mother of two Navy sailors – wrote President Roosevelt with the idea of sealing ammunition box seals with a fabric tape she has tested at her factory.

Tasked with the job by the War Production Board, the Revolite division of Johnson & Johnson developed a new, unnamed product made of thin cotton duck coated in waterproof polyethylene, with a layer of rubber-based adhesive bonded to one side. Easy to apply and remove, the tape was colored in army-standard matte olive drab and nicknamed "duck tape" by the soldiers (whether due to its to cotton duck fabric, its waterproof characteristics like a duck bird, or perhaps the name of the 1942 amphibious military vehicle, the DUKW). After the war, the duck tape product was sold in hardware stores for household repairs and was commonly used in construction to wrap air ducts, spurring the name "duct tape,” and being altered to a silvery gray color to match tin ductwork.

This favorite nostalgic toy for children and adults actually has its origins in World War II ingenuity, when Japan invaded rubber-producing countries and the U.S. government began to ration rubber products and actively fund research into synthetic rubber compounds to solve the shortage. Rubber was vital for the production of aircraft parts, boots, gas masks, etc. and civilians citizens were encouraged to make their rubber products last until the end of the war and to donate spare tires, boots, and coats.

Although the original creation of silly putty is disputed between two sets of researchers, it was discovered that reacting boric acid with silicone oil would produce a gooey material with several unique properties. For example, the non-toxic putty would bounce when dropped, could stretch farther than regular rubber, would not go moldy, and had a very high melting temperature. However, the substance lacked some of the important properties needed to replace rubber, and its future was uncertain. Eventually, a toy maker discovered the product, and through a rough road to success, it was eventually marketed to children, packaged in its iconic red egg-shaped container, and embraced across the world as a fun, strange, and slightly indefinable favorite toy and was inducted into the National Toy Hall of Fame in 2001.

Now a common household term, the original name for this super-sticky substance was “cyanoacrylate.” It was originally discovered by a team of scientists looking for materials suitable for clear plastic gun sights for the war effort. The cyanoacrylate basically was an acrylic resin that rapidly polymerizes in the presence of water (even the small amount in the air), causing a thin skin to start to form within seconds. When applied thinly, it gives a user just enough time to set it before the rapid bonds are formed.

The researchers soon realized this material was not suitable for use in war applications since it almost immediately stuck to everything. But a handful of years later, while working for the Eastman Kodack company, they realized its commercial uses sold the first commercial version of the adhesive in 1958. Today there are numerous versions of cyanoacrylate on the market, used in a wider range of applications such as cosmetics, electronics, the medical field and woodworking.

One of today’s most common and comfortable clothing item is the undershirt – or “T-shirt”– a one-piece slip-on garment that can be worn under other shirts or on its own. The origin of the first button-less, slip-on shirt reaches back between the Spanish-American War of 1898 and the year 1913, when the U.S. Navy began issuing them as undergarments to be worn under uniforms. These first T-shirts were crew-necked and short-sleeved and made from white cotton. It was common for sailors and Marines in work parties, submarines, and tropical climates to remove their uniform jacket, and wear only the undershirt while working.

These comfortable, easy-to-clean undershirts soon became a popular bottom layer of clothing for workers in various industries, including agriculture. Because they were easily fitted and inexpensive, they became a popular clothing choice with the general public as well, especially children, and eventually were developed into the wide range of colors and design options we know today.

Bonus: Among the other products that resulted from military-based innovation are: anti-lock brakes, aviator sunglasses, convenience foods (like instant coffee, frozen juice concentrate, and freeze-dried foods), the Jeep and microwaves.