Posted in Uncategorized on April 3, 2018

The United States Cadet Nurse Corps was a crucial organization in the war effort during World War II. At one time, they comprised 80% of the nurses in the United States as war called many nurses to the front and other women to other defense-minded industries. Yet, on their 75th anniversary, the Corps remains the only uniformed corp members in the war to not be recognized as Veterans. 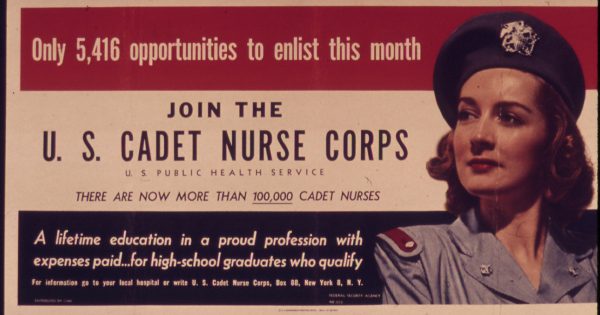 Learn more about the Cadet Nurse Corps and their efforts to be recognized as official United States Veterans.

The U.S Cadet Nurse Corps was established in 1943 by an act of Congress and signed into law by President Franklin D. Roosevelt. The Corps was operational until 1948 with a goal of training a new nursing workforce to mitigate the shortage of nurses during World War II.

Many nurses were called overseas to military service, other women were serving in various ways to support the war effort, leaving civilian hospitals in the United States critically understaffed. By 1945, Cadet Nurses were providing 80% of the nursing care in hospitals throughout the United States.

To this day, the Cadet Nurses are the only uniformed corp members in World War II to not be officially recognized as veterans. 2018 marks the 75th anniversary of the dissolution of the U.S. Cadet Nurse Corps and some are hoping it also marks the recognition of these dedicated nurses as United States Veterans.

There have been several bills in Congress that have advocated awarding Cadet Nurses status as Veterans. However, none have passed. The most current bill, H.R. 1168, the U.S. Cadet Nurse Corps Equity Act, was introduced in February of 2017 and has been sent to a military personnel subcommittee in late March. The bill would declare that any service as a member of the U.S. Cadet Nurse Corps between July 1, 1943 and December 31, 1948 would have been an active duty military member. If passed, the Department of Defense would issue an honorable discharge within one year to each person who served and whose service qualified them as a Veteran. The bill does not allow for retroactive benefits to be paid or awarded.

While the United States Congress is debating the issue, some states are considering passing their own legislation to honor the service of these women. Massachusetts State Senator Bruce Tarr is hopeful the federal bill will be passed. He says that is happy to work with state legislation and that, “We’re exploring our options for that right now.” He admits that while a state bill would be a good step in the right direction, “the primary driver of veterans benefits is the federal government.”