How a Government Shutdown Could Affect Veterans 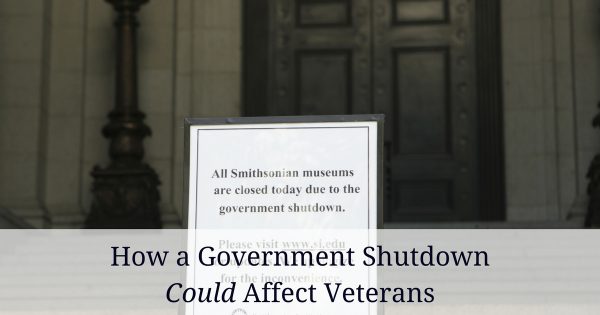 In Washington, tensions are increasing as the debate over immigration reform rages on and key leaders from opposing parties are preparing for yet another potential government shutdown. President Trump recently reiterated his push for a long-promised border wall, followed by an announcement that the Deferred Action for Childhood Arrivals (DACA) would no longer be accepting new applicants. DACA is an Obama-era program that assisted children of undocumented immigrants for a certain period of time. In opposition, some leading Democrats have implied that they may be withholding support for spending legislation later this year as a result of the administration’s immigration reform demands, effectively bringing government operations to a halt.

It’s obviously not the first time that such standoffs have had a major ripple affect across the government and the country. In October 2013, the government endured a 16-day shutdown – the longest shutdown since 1980 – that, according to the Washington Post, cost $23-24 billion in lost economic output, most of which came from government workers not getting paid. At that time, approximately 40% of the federal civilian workforce was “furloughed” and did not receive payment, although Congress would later approve a bill to guarantee them back pay. Thankfully, hours before the shutdown took effect, President Obama signed a measure into law that guaranteed pay to U.S. troops, although some nonessential services were interrupted and some civilian DOD employees were impacted.

During the 2013 shutdown, most of the Department of Veterans Affairs (VA) essential services continued, although the shutdown reportedly stalled out some disability checks and disrupted VA loans for small businesses, as well as hampering ongoing efforts to work through backlogged claims.

One of the most notable impacts to veterans during the shutdown, however, was the scene at the World War II monument, where – in an act of civil disobedience – someone removed the barricades around the temporarily closed monument so that a group of visiting elderly veterans could enter. Many of the attendees were veterans of Omaha Beach, Okinawa, and the Italian campaign, having traveled thousands of miles for what, for most, was a once-in-a-lifetime chance to see a monument built in their honor and in memory of their fallen comrades. They waited at the fenced-off edge of the barricade in walkers and wheelchairs, until the gates mysteriously parted, and they were able to enter, to the cheers of surrounding civilians and a handful of Congressmen. The monument, along with other national venues, had been closed as part of the shutdown in an effort to protect the monuments and their visitors, according to the National Parks Service. Some of the pieces of the barricade were carried all the way to the lawn of the White House and left in a silent protest.

These highly publicized standoffs are sure to make many civilians and veterans nervous, but the VA and other organizations are working to ensure that everyone is aware of what will and what will not likely be impacted by a potential government shutdown.

During a similar build-up earlier this year over government funding, VA Secretary, David Shulkin, made an appearance on CBS This Morning and explained that veterans should not worry about a potential government shutdown impacting their services or support.

"The VA is in a fortunate situation in that we have what's called an ‘advanced appropriations,’ so we get our money a year ahead of time because I think Congress understands that the VA can't shut down, that we are there for the safety of our veterans," Shulkin explained. “There’s no risk to veterans,” he added.

Additionally, organizations like the Military Officers Association of America (MOAA) are proactively reaching out to veterans to educate them on what might and most likely would not be affected by a government shutdown.

For example, while some VA employees could be furloughed, most of the department's clinics and facilities remain fully functional. Access to dental care, in- and outpatient care, mental health appointments, nursing home care, prescriptions, surgeries (at least, non-elective surgeries) and vet centers, won't be interrupted. Additionally, payments for retirees or those receiving annuities, like surviving spouses who are paid under the Survivor Benefit Plan, should not be impacted.

You can view a complete list of what services are and are not impacted by a lapse in appropriations in a published "Veterans Field Guide to Government Shutdown" document.

One Response to “How a Government Shutdown Could Affect Veterans”