The U.S. Army Transport (U.S.A.T.) Dorchester was a World War II troop ship that was hit by a German torpedo on February 3rd, 1943. The ship’s story became very famous due to the rescue efforts of many brave men, from the crew of nearby ships in the convoy, to the brave acts of the “Four Chaplains” who helped men escape the sinking ship by sacrificing their own lives. 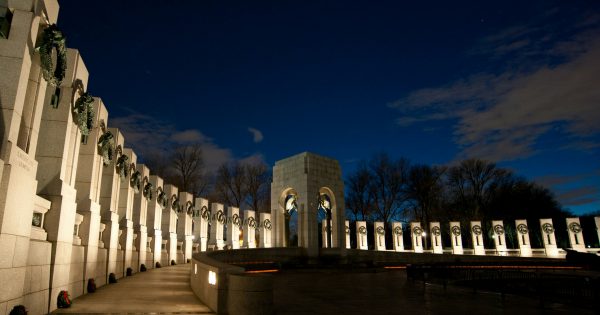 After the invasion of German troops into Denmark, United States Army soldiers were deployed to Greenland, to protect the island and break up an establishment of Nazi bases. The U.S. Army transport, the Dorchester, was part of a convoy traveling from the United States to Greenland. The Dorchester was carrying over 900 men headed for an Army Command Base in southern Greenland — but the ship never arrived at its destination, because it was struck by a torpedo fired by a German U-boat.

On board were four World War II military chaplains, including:

The four chaplains went down in the history books, because of their bravery in helping to save military personnel, as the ship sank within 20 minutes of the German submarine attack. All four chaplains worked diligently, staying aboard the sinking Dorchester and surrendering their life jackets, in a brave and selfless act, aimed at helping the men who jumped into the treacherous icy waters of the North Atlantic to escape the sinking ship.

The Four Chaplains are referred to today as "immortal" for the selfless actions and sacrifices they made on that perilous day in February.

The story not only involves the brave acts of the Four Chaplains, in addition, there were many other men who acted with courage to help their fellow sailors, officers and soldiers, who were in danger. The death toll ended up being around 700, but 200 men survived, all with inspirational stories of bravery regarding what transpired that day.

The USCG Escabana and the USCG Comanche ships were nearby at the time of the German U Boat attack on the Dorchester. Here are some of the true-life stories of the survivors that are still on record today, preserved in the National Archives:

On February 3, 1951, a movement began to honor the bravery that the Four Chaplains displayed on that precarious day, nearly a decade earlier. The organization was started by Reverend Daniel Poling (father of Chaplain Poling) to commemorate his son’s (and the other three interfaith chaplains’) bravery and courage. The organization advocates for and honors the legacy of the Four Chaplains aboard the U.S.A.T. Dorchester in 1943.

President Harry S. Truman gave a dedication speech in honor of the brave men who risked their lives, and the many who died, because of the sinking of the Dorchester. In his dedication speech, Truman said, “This interfaith shrine… will stand through long generations to teach Americans that as men can die heroically as brothers so should they live together in mutual faith and goodwill.”