Art From the Frontlines: Exhibit Tells the Stories of WWI

Posted in Uncategorized on March 8, 2018

The year 2018 marks the centennial anniversary of World War I, also known as “The Great War” and the “War to End All Wars,” reminding the world of the 16 million civilians and soldiers who died or disappeared over four years of fighting. 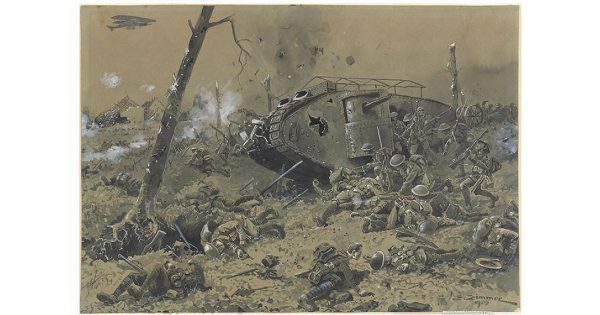 Source: Images of the Great War/ The National World War I Museum and Memorial

While the war originated in Europe and the U.S. entered into the conflict only during the last two years, around 4 million U.S. military members played a pivotal role in helping finally bring the war to an end in 1918.

Arguably one of the premiere WWI memorials in the U.S., The National WWI Museum and Memorial in Kansas City has been preparing for this special anniversary for much of the year leading up to it, including presenting many special gallery exhibits and temporary displays.

Among these is one very special exhibit entitled, “Images of the Great War: America Crosses the Atlantic,” which will be on display until March 13, 2018.

Focusing on the final two years of the Great War with the emphasis on American involvement, the exhibit shares drawings, paintings and other artwork from the battlefield. These pieces were originally created for illustrated journals or as personal pieces studio artists and soldiers alike used to capture the heroism, pain and sorrow they witnessed during an incredibly brutal war.

The artists included were American, French and German, and some were even drawn with a pencil while the soldier sat on the battlefield.

This special exhibit, housed in the museum’s Ellis Gallery, was organized by Brown University Library and The President Woodrow Wilson House. Woodrow Wilson was the U.S. president serving at the end of the War when all countries signed the Treaty of Versailles. The wide range of art helps give a personal, deep insight into the harsh realities of war.

The museum also offers visitors numerous permanent exhibits and displays, like the 9,000 red poppies that welcome you into the Museum, and the “Immersion Gallery” that sets you into the storyline with large-scale display objects and personal items. The museum is also home to the towering Liberty Memorial standing onsite as a “beacon of freedom and a symbol of the courage, patriotism, sacrifice, and honor of all who served in World War I.”

Numerous online exhibits help the museum with its mission to collect and share the most important stories of the War and help all people learn from the sacrifices made during the Great War.