What Veterans Need To Know Before a VA PTSD Evaluation

PTSD is one of the most well-known but little-understood illnesses in modern American life. When it comes to military servicemen and veterans, it helps to know some basic information about what they can expect in a VA PTSD evaluation.

Post-traumatic stress disorder (PTSD) is a mental health disorder that, although quite common, is frequently misunderstood and even misdiagnosed in many cases. Officially, PTSD is classified in the Diagnostic and Statistical 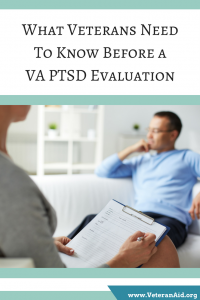 Manual of Mental Disorders, Fifth Edition (DSM-V) as a trauma and stressor-related disorder.

Four groups of symptoms are taken into account when PTSD is being diagnosed:

Because other diagnoses like anxiety and depression share many of these symptoms, many veterans are diagnosed too late.

What happens after a PTSD diagnosis?

After a diagnosis has been confirmed, the next step is to get help. For veterans, this usually means seeking out PTSD resources through the U.S. Department of Veterans Affairs. In order to do this, there must first be a current VA PTSD diagnosis from an expert the VA has deemed competent. Second, credible evidence of the in-service stressor must be presented. This is often the most challenging aspect of service connection, as there are numerous and strict rules that dictate what can be considered credible evidence of a stressor. Finally, medical evidence that reveals a causal relationship between the stressor and the symptoms must be presented. This link is perhaps the most important aspect of qualifying for VA PTSD treatment.

How does the VA rate PTSD?

After service connection has been provided for a veteran diagnosed with PTSD, the VA must assign a rating. This rating is an important part of the process, as it has an impact on average impairment in earning capacity. The current system allows the Veterans Affairs officials to assign PTSD ratings of 0, 10, 30, 50, 70, or 100% disabling.

Like the initial diagnosis, PTSD ratings depend on several factors:

Each of these symptoms affects the VA’s assigned rating. And during the evaluation, the VA must also consider the following:

In addition to assessing the severity of the disorder, this process helps the VA determine what level of disability benefits a veteran may qualify for. With that in mind, it’s imperative for veterans to be as honest as possible about how PTSD is affecting their day-to-day functioning. Evidence of how PTSD is affecting a veteran’s ability to work is crucial. The instinct to “tough it out” or downplay symptoms can have dangerous consequences.

What can you do if the VA denies disability?

If a veteran was denied service connection and disability, it’s important to closely examine what factors may have been missing or incorrect in the evaluation. Taking adequate time to review these details could very well mean the difference when seeking a second diagnosis and service connection.

This article was contributed by the veterans disability lawyers at Hill & Ponton. The information contained in this article can be found in their PTSD Guide for veterans. 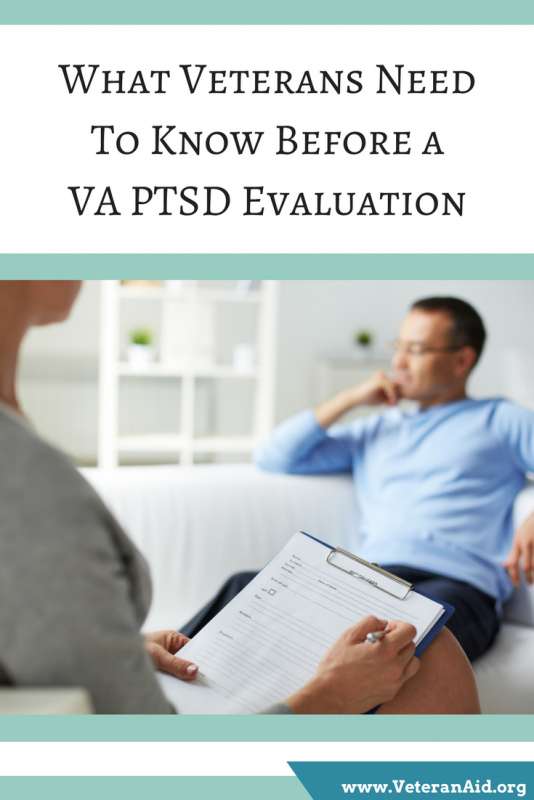