If you have an interest in both the law and serving in the U.S. military, you could be the ideal candidate to become a Judge Advocate General, or “JAG.” Military lawyers handle the same types of cases as civilian lawyers – both civil and criminal – with the addition of military law issues, and their clientele is comprised completely of military personnel, their families, and military retirees. 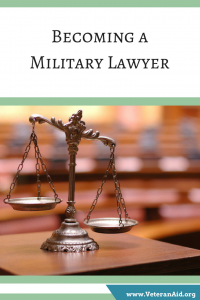 To become a JAG, a candidate must have completed an undergraduate degree, passed the Law School Admissions Test (LSAT), and completed law school with a Juris Doctor degree in law. Each branch of the service retains its own JAGs and holds slightly different commissioning processes, but attorneys who choose to enter the U.S. military will do so as commissioned officers under a four-year active duty commitment, with an additional required four year commitment in an inactive duty status.

JAGs must possess an in-depth understanding of both civil and military law. Their job duties range from roles one would encounter in civilian courts – including criminal cases, preparing legal documents, and acting as counsel in court – to military-specific offenses, such as desertion, murder in combat, and insubordination. A military attorney may also represent an offending party during a court marshal, assist in a landlord-tenant dispute, help commanding officers understand aspects of international law, and even create and maintain military handbooks.

JAGs also provide free legal assistance in a wide range of matters, including: drafting wills, estate planning, reviewing contracts and leases, family and domestic relations issues, tax advice, notarization, consumer affairs, and immigration and naturalization advice. They can also refer a client to a civilian attorney as necessary. These services are available to all military personnel, reservists, legal dependents, and military retirees.

Serving as a JAG does not preclude you from living abroad, as military lawyers are present in most bases, ships, installations, and even combat zones around the world (the exception is the Cost Guard which typically only stations its JAGs within the U.S.). Many candidates choose to apply for a military law program with the branch of their choosing during the first or second year of law school. Depending on the branch, upon acceptance you will either attend an OCS, be commissioned into the reserve force, or join the applicable ROTC program; it’s best to talk to your local recruiter as soon as possible to learn more about the process, application dates, and to begin to work towards meeting all scholastic and physical requirements.

The salary of a military attorney is set by rank and years in the military, and a new attorney may start out at $38,000 a year. As they move up the ranks – JAGs are typically promoted within six to 12 months of commissioning – they can earn up to six digit incomes. The Army, Air Force, and Navy offer loan forgiveness programs of around $60,000, and graduating students may also be eligible for state loan forgiveness programs for attorneys employed in public service.

For more information on the top frequently asked questions about becoming a JAG, including the differences between the branches, visit this in-depth Judge Advocate General FAQ page created by the University of Virginia School of Law.