Even in the digital age, the holiday season still means for many Americans a chance to send and receive beautiful and heartfelt notes and cards in the mail. There’s something special about the old-fashioned, hard copy letters and cards that can be saved, displayed, held in the hand, and reread at any time. Now imagine being stationed thousands of miles away from friends, family, and loved ones; a handwritten note, colorful drawing, or simply stated card of 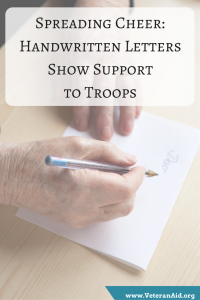 gratitude and support means even more to a deployed member of the U.S. military.

Writing a letter or note may take just a few moments of effort, but can have an exponential effect on a member of the U.S. military who is far from home. Many troops do not receive much mail from home, and the long and sometime monotonous days in a foreign country can really begin to wear on their spirits. Hearing your name called at mail call – and realizing that a citizen took the time to write and is keeping you in their daily thoughts and prayers – can be just the spark that keeps you going.

Don’t know where to start? There are numerous non-profit organizations that offer many ways to join the support effort for U.S. troops. Whether you want to compose and send your own full-fledged care package, simply send monetary donations to help a care package be created and sent, or add your own heartfelt note to packages on their way, you can find just the right opportunity to help. Below are five great organizations supporting thousands of soldiers, veterans, and military families, and who need your help.

With the motto, “May No Soldier Go Unloved,” Soldiers’ Angels coordinates numerous outreach programs to veteran, deployed, wounded, and military families. Its volunteers, called “Angels,” are responsible for more than 1.5 million letters and 800,000 care packages being sent to deployed heroes. Through the organization’s Letter Writing Team, you can adopt a soldier who may not normally receive any mail from home. LWT Angels write a one-time letter to a service member who is waiting for adoption through the Soldier’s Angels Deployed Adoptions Team and to those who might need additional support. The minimum commitment as an LWT Writer is three months, and you are asked to request a minimum of one name per month.

Begun in 2004 as a community service project by a 15 year old in Orange County, California, this organization originally set the goal of sending one million cards and letters of appreciation to U.S. military serving around the world. The campaign quickly became known nationally and reached its goal within six short weeks. To date, A Million Thanks has distributed more than seven million letters U.S. troops stationed around the world, and now works with over 50 official letter drop-off locations nationwide. You’re encouraged to keep your letter addressed generally so that your expression of gratitude could be applicable to any member of the military, active, retired, or reserve.

The USO Force Behind the Forces

For more than 75 years, the United Service Organizations (USO) has been synonymous with supporting troops and families with a variety of services. Although it is a private, nonprofit organization, it was originally chartered by the U.S. Congress and every U.S. president has served as the Honorary Chairman since 1941. Among its many activities, the USO is conducting a drive to have 1.4 million messages – one for every man and woman in uniform –  sent to U.S. troops. Its website makes this particularly easy by providing a free and easy portal for your to enter an electronic message that can be delivered digitally.

Based out of California, Operation Gratitude sends more than 200,000 care packages each year to veterans, new recruits, active duty, military families, and first responders. The feedback they receive is that the personal letters and drawings included are often the most cherished items in the package, so they aim to include several in each. Members of the public can write several letters (or have children draw colorful pictures) and send them, unfolded and not in individual envelopes, in one large envelop to Operation Gratitude headquarters. Once there, they are screened and then included in a care package. Operation Gratitude also hosts an annual drive for Halloween candy and sends more than 500,000 pounds of candy to troops every year.

With the slogan, “If they’re there, we’re with them!” this charity hosts numerous outreach programs to troops, veterans, and military families, but has a special focus on deployed military members. Along with its care package campaign, Support Our Troops also hosts several unique troop support programs including providing treats for military K-9 units, an organized coupon-share program with military families, a “fraud sentry” program to fight scammers who target the military. One of its key outreach programs is its letter-writing campaign that works to include several letters of gratitude in the care packages it sends overseas. Its website is full of thank you notes from the grateful troops that clearly show how such a simple gesture can positively impact a soldier and make him or her feel loved, supported, and remembered.

Writing a note or a letter may take just a few minutes of your day but can mean so much to the recipient who is looking for tangible reminders that he or she is remembered, supported, and appreciated for the sacrifices of their work. Joining your efforts with these great organizations can ensure that your voice is added to the thousands saying, “Thank you.”