Around 1.5 million retirees are expected to leave the energy sector in the next decade, leaving a gap that must be filled by hard-working, self-motivated, safety-conscious employees. Organizers of a new movement, Veterans in Energy, believe that U.S. veterans are the perfect candidates to fill and excel in these roles, and is leading a nation-wide effort to provide transition, retention, and professional development for military veterans working in the energy 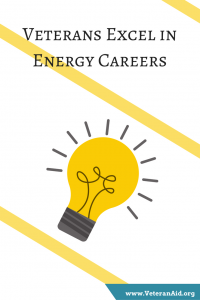 This week in Washington, D.C., the new organization hosted its first official event, the 2016 National Leadership Summit on Capital Hill, featuring leaders from across the energy industry and the U.S. government. The goal of the two-day summit was to discuss work being done around the country to support military-to-civilian transitions and examine how veterans can have strong, successful careers in energy. The event also finalized the national structure of the organization, which will have leadership roles at national, regional, and state levels, and formally open membership enrollment.

The origins of Veterans in Energy reflects the longstanding use of nuclear energy in the U.S. military to power ships and submarines, a relationship that has in turn created a well-trained military workforce parallel to that in the civilian industry. Additionally, skills and traits developed during military service – teamwork, motivation, ability to work under stress – are especially attractive to employers in the utility industry. There is already an employment pipeline from the military to the energy sector, and Veterans in Energy aims to help veterans go further in their energy careers.

As Veterans in Energy continues to fill its leadership rolls and finalize its operating structure, its sister organization, Troops to Energy Jobs, currently maintains a robust listing of jobs in the energy sector as well as a detailed transition roadmap to help veterans transition from service to a lucrative and successful career in energy. Jobs in the energy sector cover nuclear, gas, solar, wind, hydro, transmission and distribution, and rural cooperatives. Roles include linework, business administration, engineering, marketing support, customer service, field operations, graphic design, and many others.

Veterans interested in supporting Veterans in Energy and or serving on the inaugural leadership team are invited to complete a short survey on the Veterans in Energy website. Formal enrollment in the organization will be open to the public soon after the Leadership Summit.