Commitment, honor, skill, and discipline are traits that make a great soldier. Coincidentally, those are the same traits that also make a great beer. Across the country, veterans are serving up some very tasty beverages. Let’s take a tour of some of the best veteran-run breweries around. 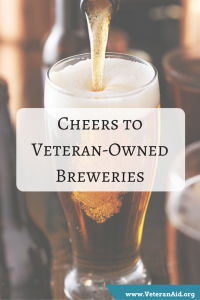 Based in Chicago, this home-grown favorite was started by retired US Navy veteran Paul Jenkins. Jenkins started the brewery to do something fun, but also provide jobs for veterans without work. The brewery proudly employs 100% veteran staff.  With availability in only in a few Midwest states, be sure to try out a few of their multi-award winning brews.

Former Army Field Artillery soldier Todd Baldwin was feeling lost after his last tour of duty. He had not expected the transition into civilian life to be so difficult. It wasn’t until the idea of starting a brewery materialized that Baldwin felt energized again. Determined to launch the brewery himself, Baldwin utilized credit card loans and a handful of small business loans to get it off the ground. Baldwin’s success has prompted him to help other veterans launch their business ideas. Since launching Red Leg, Balwin’s veteran entrepreneur network in over 100 strong.

Idaho born, Mad Bomber Brewing began when a trio of Afghanistan bomb-squad veterans decided they needed a less-explosive passion. The three were having trouble finding good-enough jobs to support their families. That is when the idea of starting a small business was hatched. With significant post-war stories and traumatic memories, Tom Applegate (one of the founders) thought a brewery might be a good business for the team. A brewery could help them decompress and remember the good times with good friends. Just like the other breweries mentioned above, Mad Bomber also has a secondary mission. Their mission is to help Wounded Warriors, and 50% of their sales go to the Wounded Warrior Project.

Brothers, Ryan and Sean Arroyo started Heritage when their passion for homebrew became more than a hobby. As ex-Marines, they understood the type of dedication the project would need to get it off the ground. Utilizing a Kickstarter campaign, the two launched Heritage in 2013 in Manassas, Virginia. Guaranteeing the finest ingredients, Heritage uses organic, fully sustainable products to produce their world-class brews. And, they too, give back to their veteran brethren. One percent of their sales and time go back to helping the veteran community. If you are interesting in donating, be sure to email them at: GiveBack@HeritageBrewing.com

Next time you are looking for a few good brews, check out these veteran-owned favorites for a true taste of Americana and some good old-fashioned patriotism. Cheers!